Lactation is the secretion of milk from specialized glands (mammary glands) to provide nourishment to offspring.

Lactation describes the secretion of milk from the mammary glands and the period of time that a mother lactates to feed her young. The process occurs in all female mammals, although it predates the origin of mammals.

In humans the process of feeding milk is called breastfeeding or nursing.
The chief function of lactation is to provide nutrition and immune protection to the young after birth. In almost all mammals, lactation induces a period of infertility, which serves to provide the optimal birth spacing for survival of the offspring.

In most species, milk comes out of the mother’s nipples; however, the platypus (a non-placental mammal) releases milk through ducts in its abdomen. In only one species of mammal, the dayak fruit bat, is milk production a normal male function.

In some other mammals, the male may produce milk as the result of a hormone imbalance. This phenomenon may also be observed in newborn infants as well (for instance, witch’s milk).

Galactopoiesis is the maintenance of milk production. This stage requires prolactin and oxytocin.

At this stage, high levels of progesterone inhibit most milk production. It is not a medical concern if a pregnant woman leaks any colostrum before her baby’s birth, nor is it an indication of future milk production.

At birth, prolactin levels remain high, while the delivery of the placenta results in a sudden drop in progesterone, estrogen, and human placental lactogen levels. This abrupt withdrawal of progesterone in the presence of high prolactin levels stimulates the copious milk production of the lactogenesis II stage.

When the breast is stimulated, prolactin levels in the blood rise and peak in about 45 minutes, then return to the pre-breastfeeding state about three hours later. The release of prolactin triggers the cells in the alveoli to make milk.

Colostrum is the first milk a breastfed baby receives. It contains higher amounts of white blood cells and antibodies than mature milk, and is especially high in immunoglobulin A (IgA), which coats the lining of the baby’s immature intestines, and helps to prevent pathogens from invading the baby’s system. Secretory IgA also helps prevent food allergies. Over the first two weeks after the birth, colostrum production slowly gives way to mature breast milk. 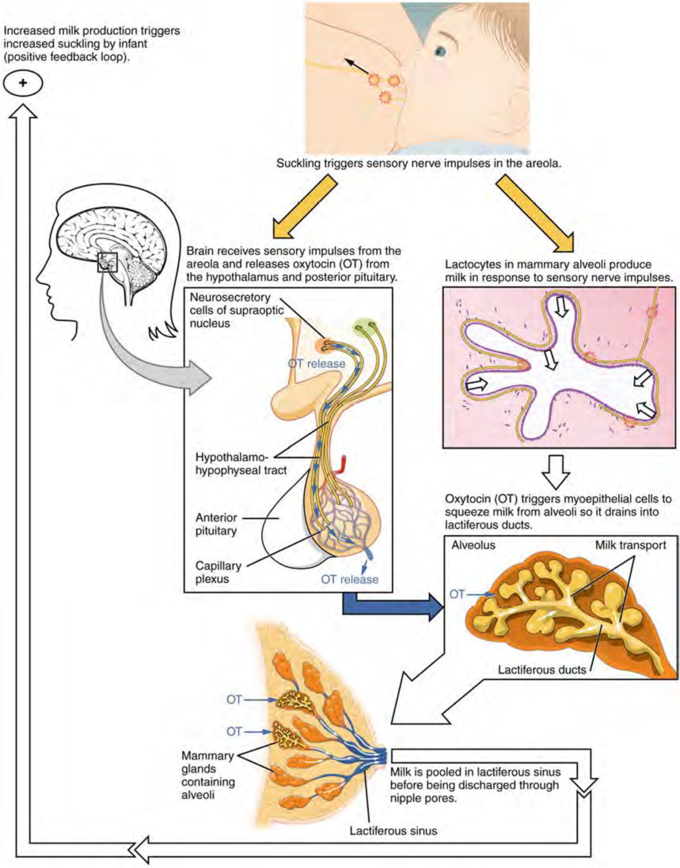