The most common blood disorders involve defects in the amount or activity of factors involved in coagulation.

The most common blood disorders, Von Willebrand disease, hemophilia, and Factor V Leiden thrombophilia, all involve defects in the amount or activity of factors involved in coagulation.

There are three types of von Willebrand disease: type 1, type 2, and type 3. People with type 1 and type 2 von Willebrand disease may have the following mild-to-moderate bleeding symptoms: easy bruising, nosebleeds, bleeding from the gums after a dental procedure, heavy menstrual bleeding in women, blood in their stools or urine, and excessive bleeding after a cut or other accident or surgery.

Type 2 von Willebrand disease has four subtypes and ranges from mild to moderate in severity. In this type of disease, there is a defect in von Willebrand factor resulting in improper activity.

Many people with von Willebrand disease do not require treatment to manage the disease. However, if treatment is necessary, it may include a range of different interventions depending on the severity. These involve medicine to increase the level of von Willebrand factor in the blood, medicine to prevent the breakdown of clots, medicine to control heavy menstrual bleeding in women, or injection of clotting factor concentrates.

Hemophilia is a disease where there is a low levels of, or none, of a blood protein important for clotting, causing an inability to produce blood clots. There are two types of hemophilia: Type A, which is a deficiency in factor VIII, and Type B, also known as Christmas disease, which is a deficiency in factor IX. Since people with hemophilia do not have the ability to make blood clots, even a small cut can result in severe bleeding, or the smallest bump or jar to the body could cause severe bruising that does not heal for months. Hemophilia is a recessive, sex-linked inheritable disorder, which is more common in men than women. Treatment typically involves replacement of the missing blood factors through blood transfusions. 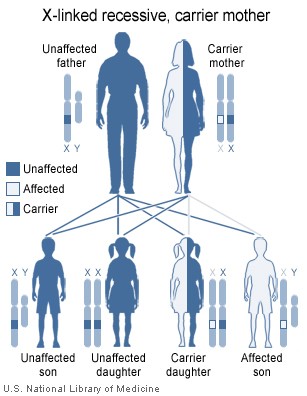 The opposite of hemophilia, is Factor V Leiden thrombophilia, a disorder of human factor V blood protein that causes a hypercoagulability disorder, or, overactive clotting, resulting in dangerous blood clots. In this disorder, the Leiden variant of factor V cannot be inactivated by activated protein C, as it would be in a person with normal factor V, resulting in excess clotting. Factor V Leiden is the most common hereditary hypercoagulability disorder among Eurasians. Those that have it are at a slightly higher risk of developing blood clots than those without. Those that test positive for factor V should avoid oral contraceptives, obesity, smoking, and high blood pressure to reduce their risk of developing blood clots. 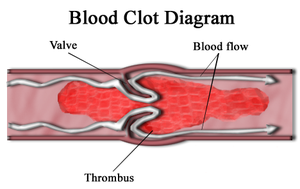