Mononucleosis is an infectious disease caused by the Epstein-Barr virus (EBV) and results in flu-like symptoms.

Infectious mononucleosis is an infectious, widespread viral disease caused by the Epstein–Barr virus (EBV), one type of herpes virus, to which more than 90% of adults have been exposed. Occasionally, the symptoms can recur at a later period. It is sometimes colloquially known as the “kissing disease” from its oral transmission. Most people are exposed to the virus as children, when the disease produces no noticeable or only flu-like symptoms. In developing countries, people are exposed to the virus in early childhood more often than in developed countries. As a result, the disease in its observable form is more common in developed countries. It is most common among adolescents and young adults.

The disease is characterized by fever, sore throat, and fatigue, along with several other possible signs and symptoms, especially in adolescents and young adults. The infection is spread via saliva and has an incubation period of four to seven weeks. Symptoms usually persist for two to three weeks, but fatigue is often more prolonged. Infectious mononucleosis is primarily diagnosed by observation of symptoms, but suspicion can be confirmed by several diagnostic tests. The most commonly used diagnostic criterion is the presence of 50% lymphocytes with at least 10% atypical lymphocytes (large, irregular nuclei), while the person also has fever, pharyngitis, and adenopathy. Infectious mononucleosis is generally self-limiting, so only symptomatic and/or supportive treatments are used. Rest is recommended during the acute phase of the infection.

Once the acute symptoms of an initial infection disappear, they often do not return. But once infected, the patient carries the virus for the rest of his or her life. The virus typically lives dormantly in B lymphocytes. Independent infections of mononucleosis may be contracted multiple times, regardless of whether the patient is already carrying the virus dormantly. 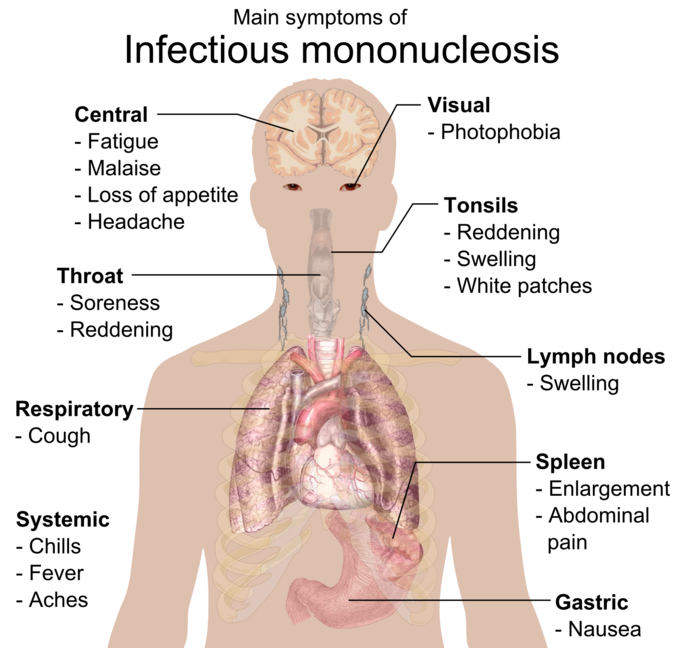 Main Symptoms of Infectious Mononucleosis: This graph illustrates the location of the symptoms.