Nerve damage can be caused by physical injury or swelling (e.g. carpal tunnel syndrome), autoimmune disease (e.g. Guillain-Barré syndrome), infection (e.g. neuritis), diabetes, or failure of the blood vessels surrounding the nerve. Nerves can be easily damaged in a traumatic event, but can regenerate if the soma and a small portion of the neurilemma remain. Neuroregeneration refers to the regrowth or repair of nervous tissues, cells, or cell products. Such mechanisms may include generation of new neurons, glia, axons, myelin, or synapses. Neuroregeneration differs between the peripheral nervous system (PNS) and the central nervous system (CNS) by the functional mechanisms and especially by the extent and speed. When an axon is damaged, the distal segment undergoes Wallerian degeneration, losing its myelin sheath. The proximal segment can either die by apoptosis or undergo the chromatolytic reaction, an attempt at repair. In the CNS, synaptic stripping occurs as glia foot processes invade the dead synapse. 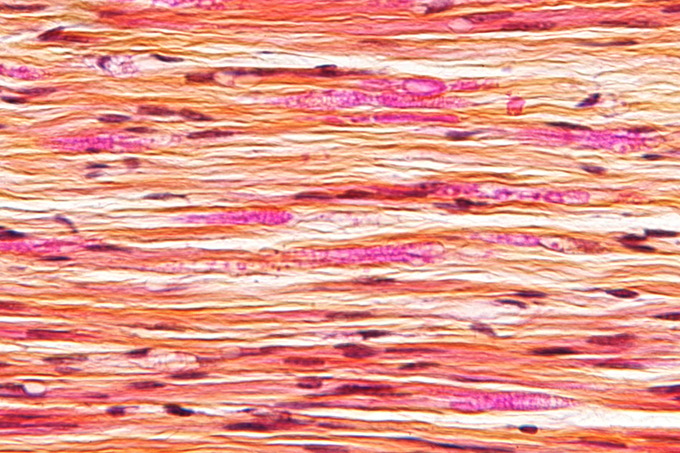 Nerve injury: Micrograph of a nerve with a decrease in myelinated nerve fibres (pink) and an abnormal increase in fibrous tissue (yellow), as may be seen in nerve injuries.

Nervous system injuries affect more than 90,000 people every year, 10,000 of which are spinal cord injuries. As a result, the field of nerve regeneration and repair, a subfield of neural tissue engineering dedicated to the discovery of new ways to recover nerve functionality after injury, is growing rapidly. The nervous system is divided into two parts: the CNS, which consists of the brain and spinal cord, and the PNS, which consists of cranial and spinal nerves along with their associated ganglia. While the PNS has an intrinsic ability for repair and regeneration, the CNS is for the most part incapable of self-repair and regeneration. There is no current treatment to recover human nerve function after injury to the central nervous system. In addition, multiple attempts at nerve re-growth across the PNS-CNS transition have not been successful. Although the PNS has the capability for regeneration, much research still needs to be done to optimize the environment for maximum regrowth potential. Nerve regeneration is part of the pathogenesis of many diseases, including multiple sclerosis.

Neuroregeneration in the PNS occurs to a significant degree. Axonal sprouts form at the proximal stump and grow until they enter the distal stump. The growth of the sprouts are governed by chemotactic factors secreted from Schwann cells (neurolemmocytes). Injury to the PNS immediately elicits the migration of phagocytes, Schwann cells, and macrophages to the lesion site to clear away debris such as damaged tissue. When a nerve axon is severed, the end still attached to the cell body is labeled the proximal segment, while the other end is called the distal segment. After injury, the proximal end swells and experiences some retrograde degeneration, but once the debris is cleared, it begins to sprout axons and the presence of growth cones can be detected. The proximal axons are able to regrow as long as the cell body is intact and they have made contact with the Schwann cells in the endoneurial channel. Human axon growth rates can reach 2 mm/day in small nerves and 5 mm/day in large nerves. The distal segment, however, experiences Wallerian degeneration within hours of the injury; the axons and myelin degenerate, but the endoneurium remains. In the later stages of regeneration, the remaining endoneurial tube directs axon growth back to the correct targets. During Wallerian degeneration, Schwann cells grow in ordered columns along the endoneurial tube. This creates a band of Büngner (boB) that protects and preserves the endoneurial channel. Also, macrophages and Schwann cells release neurotrophic factors that enhance regrowth.

Unlike PNS injury, injury to the CNS is not followed by extensive regeneration. It is limited by the inhibitory influences of the glial and extracellular environment. The hostile, non-permissible growth environment is in part created by the migration of myelin-associated inhibitors, astrocytes, oligodendrocytes, oligodendrocyte precursors, and microglia. The environment within the CNS, especially following trauma, counteracts the repair of myelin and neurons. Glial scars rapidly form and the glia actually produce factors that inhibit remyelination and axon repair. The axons themselves also lose the potential for growth with age. Slower degeneration of the distal segment than that which occurs in the peripheral nervous system also contributes to the inhibitory environment; inhibitory myelin and axonal debris are not cleared away as quickly. All these factors contribute to the formation of what is known as a glial scar, which axons cannot grow across.