The sternum, or breastbone, is a long, flat, bony plate that forms the most anterior section of the ribcage. The sternum is highly vascular in nature and covered with a thin layer of compact bone providing a degree of flexibility.

Function of the Sternum 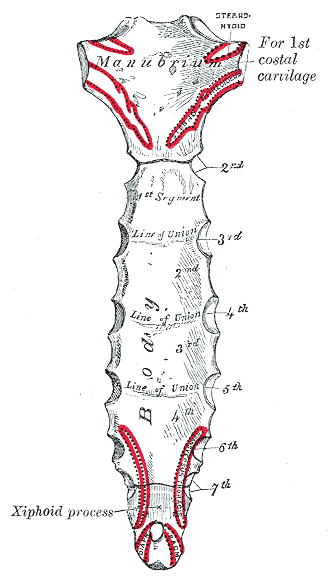 Sternum: This image shows the parts of the sternum.

Together with the anterior ribs, the sternum helps to protect the heart and lungs from damage, as well as facilitates the expansion and contraction of the thoracic cavity during respiration. During development the sternum is comprised of four individual sections called sternebrae, which fuse to form the sternum in adulthood.

Structure of the Sternum

The sternum is divided into three regions:

Located below the manubrium, the gladiolus is the longest portion of the sternum and articulates with the ribs, either directly or indirectly, through the costal cartilage

The thin, pointed xiphoid process forms the most inferior region of the sternum to which the costal cartilage and cartilage of the celiac, or solar, plexus attaches.