The ilium is the uppermost and largest bone of the pelvis.

The ilium is the uppermost and largest bone of the pelvis. It articulates with the sacrum, ischium, and pubis.

The human ilium is divisible into the body and the ala, or wing. These two parts are separated on the superior surface by a curved line known as the arcuate line, and on the inferior surface by the margin of the acetabulum. 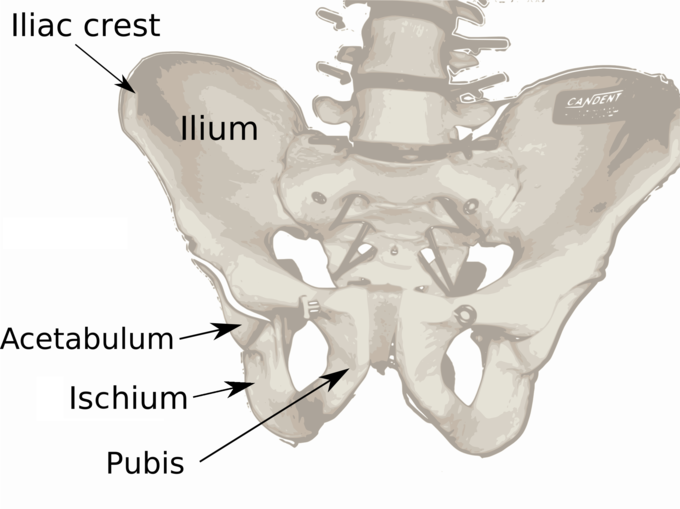 Ilium: The ilium is the uppermost bone of the pelvis and extends laterally.

The body contributes to the formation of the acetabulum, a concave structure where the head of the femur articulates to form the hip joint. The internal surface of the body forms part of the wall of the lesser pelvis and gives origin to some fibers of the obturator internus muscle.

The ala or wing, is the large expanded portion that extends laterally. It has an external and internal surface, a crest (illiac crest), and an anterior and posterior border.

The internal surface of the ala is smooth and concave and forms the iliac fossa. The sacrospinalis and multifidus muscles of the back originate in the posterior.

In humans, bi-iliac width is an anatomical term referring to the widest measure of the pelvis between the outer edges of the upper iliac bones. The bi-iliac width measure is helpful in obstetrics because a pelvis that is significantly too small or too large can have obstetrical complications. It is also used by anthropologists to estimate body mass.