The composition of tissue fluid depends upon the exchanges between the cells in the biological tissue and the blood.

The composition of tissue fluid depends upon the exchanges between the cells in the biological tissue and the blood. This means that fluid composition varies between body compartments.

The cytosol or intracellular fluid consists mostly of water, dissolved ions, small molecules, and large, water-soluble molecules (such as proteins). This mixture of small molecules is extraordinarily complex, as the variety of enzymes that are involved in cellular metabolism is immense. 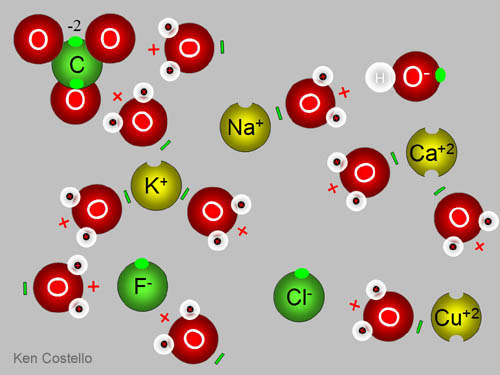 These enzymes are involved in the biochemical processes that sustain cells and activate or deactivate toxins. Most of the cytosol is water, which makes up about 70% of the total volume of a typical cell. The pH of the intracellular fluid is 7.4. The cell membrane separates cytosol from extracellular fluid, but can pass through the membrane via specialized channels and pumps during passive and active transport.

The concentrations of the other ions in cytosol or intracellular fluid are quite different from those in extracellular fluid. The cytosol also contains much higher amounts of charged macromolecules, such as proteins and nucleic acids, than the outside of the cell.

Cerebrospinal fluid is similar in composition to blood plasma, but lacks most proteins, such as albumins, because they are too large to pass through the blood–brain barrier. Ocular fluid in the eyes contrasts with cerebrospinal fluid by containing high concentrations of proteins, including antibodies.