The name “carbohydrate” tells you something about the composition of these “hydrated carbon” compounds. They contain carbon, hydrogen and oxygen and like water (H2O), there are always twice as many hydrogen atoms as oxygen atoms in each molecule. Carbohydrates are a large and diverse group that includes sugars, starches, glycogen and cellulose. Carbohydrates in the diet supply an animal with much of its energy and in the animal’s body, they transport and store energy.

Monosaccharides are the smallest carbohydrate molecules. The most important monosaccharide is glucose which supplies much of the energy in the cell. It consists of a ring of 6 carbon atoms with oxygen and hydrogen atoms attached.

Polysaccharides like starch, glycogen and cellulose are formed by tens or hundreds of monosaccharides linking together. Unlike mono- and di-saccharides, polysaccharides are not sweet to taste and most do not dissolve in water. 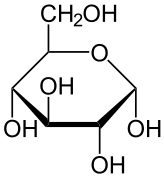 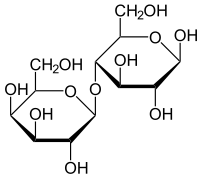