When nutrients and energy are in short supply, cells, tissues, organs, and organ systems do not function properly. Unbalanced diets can cause diseases and, conversely, certain illnesses and diseases can cause an inadequate intake and absorption of nutrients, simulating the health consequences of an unbalanced diet. Overeating high-fat foods and nutrient-poor foods can lead to obesity and exacerbate the symptoms of gastroesophageal reflux disease (GERD) and irritable bowel syndrome (IBS). Many diseases and illnesses, such as celiac disease, interfere with the body getting its nutritional requirements. A host of other conditions and illnesses, such as food allergies, food intolerances, peptic ulcers, and Crohn’s disease can impair the process of digestion and/or negatively affect nutrient balance and decrease overall health.

Typical causes of diarrhea include:

If the diarrhea lasts for a long period of time, a person could become dehydrated if fluids and minerals are not replaced. Fluids and minerals can typically be replaced through normal food and beverage consumption. However, beverages that contain electrolytes (e.g., pedialyte, sports drinks) are also an option.

Factors that contribute to constipation can include:

Common suggestions for relief of constipation include:

Gastroesophageal reflux disease (GERD) is a persistent form of acid reflux that occurs more than two times per week. Acid reflux occurs when the acidic contents of the stomach leak backward into the esophagus and cause irritation. The most common GERD symptom is heartburn (Figure \(\PageIndex{1}\)), but people with GERD may also experience regurgitation (flow of the stomach’s acidic contents into the mouth), frequent coughing, and trouble swallowing. 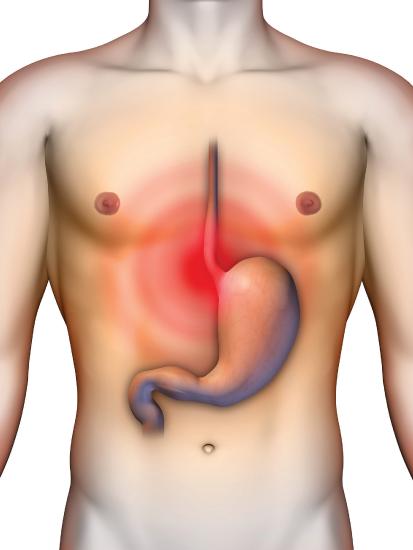 Figure \(\PageIndex{1}\): Heartburn is a burning sensation that radiates throughout the chest. © Shutterstock

The exact causes of GERD are unknown. However, some contributing factors include:

The first approach to GERD treatment is dietary and lifestyle modifications. Suggestions are to reduce weight if you are overweight or obese, avoid foods that worsen symptoms, eat smaller meals, stop smoking, and remain upright for at least three hours after a meal. There is some evidence that sleeping on a bed with the head raised at least six inches helps lessen the symptoms of GERD.

Many medications are available to treat GERD, including antacids, histamine (H2) blockers, and proton-pump inhibitors. Some evidence from scientific studies indicates that medications used to treat GERD may accentuate certain nutrient deficiencies (e.g., Vitamin B12) in older populations1. When these treatment approaches do not work, surgery is an option. The most common surgery involves reinforcing the sphincter that serves as a barrier between the stomach and esophagus.

Irritable bowel syndrome (IBS) is characterized by muscle spasms in the colon that result in abdominal pain, bloating, constipation, and/or diarrhea. Interestingly, IBS produces no permanent structural damage to the large intestine. The disorder is more prevalent in women than men. There is no specific test to diagnose IBS, but other conditions that have similar symptoms (such as celiac disease) must be ruled out. This involves stool tests, blood tests, and having a colonoscopy (which involves the insertion of a flexible tube with a tiny camera on the end through the anus so the doctor can see the colon tissues).

The precise cause of IBS isn't known, but factors that appear to play a role include:

As with GERD, the first treatment approaches for IBS are diet and lifestyle modifications. People with IBS are often told to keep a daily food journal to help identify and eliminate foods that cause the most problems. Other recommendations are to eat slower, add more fiber to the diet, drink more water, and/or consider following a low FODMAP diet2. FODMAP stands for Fermentable Oligosaccharides, Disaccharides, Monosaccharides and Polyols; following a low FODMAP diet is highly recommended for people with IBS.

Celiac disease is an autoimmune disorder caused by an abnormal immune reaction of small intestine cells to a type of protein, called gluten. Gluten is found in grains that are commonly used to make bread, such as wheat, rye, and barley. For those who are sensitive to gluten, it is good to know that corn, millet, buckwheat, and oats do not contain the proteins that make gluten. However, some people who have celiac disease also may have a response to products containing oats. This is most likely the result of cross-contamination of grains during harvest, storage, packaging, and processing.

Symptoms can range from mild to severe and can include pale, fatty, loose stools, gastrointestinal upset, abdominal pain, weight loss and, in children, a failure to grow and thrive. The symptoms can appear in infancy or much later in life, even by age seventy. Celiac disease is not always diagnosed because the symptoms may be mild.

Celiac disease diagnosis requires a blood test and a biopsy of the small intestine. Because celiac disease is an autoimmune disease, antibodies produced by white blood cells circulate in the body and can be detected in the blood. When gluten-containing foods are consumed the antibodies attack cells lining the small intestine leading to a destruction of the small villi projections (see Figure \(\PageIndex{2}\))3. This tissue damage can be detected with a biopsy, a procedure that removes a portion of tissue from the damaged organ. Villi destruction is what causes many of the symptoms of celiac disease. The destruction of the absorptive surface of the small intestine also results in the malabsorption of nutrients, so that while people with this disease may eat enough, nutrients do not make it to the bloodstream because absorption is reduced. Over time these nutrient deficiencies can cause health problems. Poor absorption of iron and folic acid can cause anemia, which is a decrease in red blood cells. Anemia impairs oxygen transport to all cells in the body. Calcium and vitamin D deficiences can lead to osteoporosis, a disease in which bones become brittle.

If you think you or someone close to you may have celiac disease, do not despair; it is a very treatable disease. Once diagnosed, a person follows a gluten-free diet for life. This requires dedication and careful detective work to seek out foods with hidden gluten, but many stores and restaurants carry gluten-free foods. After eliminating gluten from the diet, the tissues of the small intestine rapidly repair themselves and heal in less than six months.

When someone has a food allergy, the immune system mistakenly attacks a certain kind of food (usually the protein component of a food) as if it were a threat. Food allergy symptoms usually develop within a few minutes to two hours after a person has eaten a food to which they are allergic. These symptoms can range from the annoying to the potentially fatal, and include:

There are no clear treatments for food allergies. Epinephrine is sometimes used to control severe reactions; individuals with known and dangerous allergies may get prescriptions for self-injectable devices. The only certain way to avoid allergic reactions to food is to avoid the foods that cause them. Beyond avoidance, this can mean reading food labels carefully, or even calling manufacturers for product information.

Most food allergies are caused by these eight foods: