Solids and liquids are collectively called condensed phases because their particles are in virtual contact. The two states share little else, however.

In the solid state, the individual particles of a substance are in fixed positions with respect to each other because there is not enough thermal energy to overcome the intermolecular interactions between the particles. As a result, solids have a definite shape and volume. Most solids are hard, but some (like waxes) are relatively soft. Many solids composed of ions can also be quite brittle. 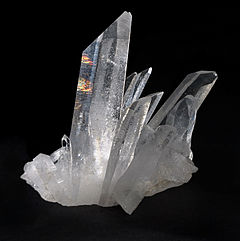 Figure \(\PageIndex{1}\): Crystalline Arrangement of Quartz crystal cluster. Some large crystals look the way they do because of the regular arrangement of atoms (ions) in their crystal structure. from Wikipedia.

Solids usually have their constituent particles arranged in a regular, three-dimensional array of alternating positive and negative ions called a crystal. The effect of this regular arrangement of particles is sometimes visible macroscopically, as shown in Figure \(\PageIndex{1}\). Some solids, especially those composed of large molecules, cannot easily organize their particles in such regular crystals and exist as amorphous (literally, “without form”) solids. Glass is one example of an amorphous solid. Figure \(\PageIndex{2}\): The formation of a spherical droplet of liquid water minimizes the surface area, which is the natural result of surface tension in liquids. from Wikipedia.

The change from solid to liquid usually does not significantly change the volume of a substance. However, the change from a liquid to a gas significantly increases the volume of a substance, by a factor of 1,000 or more. Figure \(\PageIndex{3}\) shows the differences among solids, liquids, and gases at the molecular level, while Table \(\PageIndex{1}\) lists the different characteristics of these states.

What state or states of matter does each statement, describe?

What state or states of matter does each statement describe?

Earth is the only known body in our solar system that has liquid water existing freely on its surface. That is a good thing because life on Earth would not be possible without the presence of liquid water.

Water has several properties that make it a unique substance among substances. It is an excellent solvent; it dissolves many other substances and allows those substances to react when in solution. In fact, water is sometimes called the universal solvent because of this ability. Water has unusually high melting and boiling points (0°C and 100°C, respectively) for such a small molecule. The boiling points for similar-sized molecules, such as methane (BP = −162°C) and ammonia (BP = −33°C), are more than 100° lower. Though a liquid at normal temperatures, water molecules experience a relatively strong intermolecular interaction that allows them to maintain the liquid phase at higher temperatures than expected.

Unlike most substances, the solid form of water is less dense than its liquid form, which allows ice to float on water. The most energetically favorable configuration of H2O molecules is one in which each molecule is hydrogen-bonded to four neighboring molecules. Owing to the thermal motions, this ideal is never achieved in the liquid, but when water freezes to ice, the molecules settle into exactly this kind of an arrangement in the ice crystal. This arrangement requires that the molecules be somewhat farther apart than would otherwise be the case; as a consequence, ice, in which hydrogen bonding is at its maximum, has a more open structure, and thus a lower density than water.

Here are three-dimensional views of a typical local structure of water (left) and ice (right.) Notice the greater openness of the ice structure which is necessary to ensure the strongest degree of hydrogen bonding in a uniform, extended crystal lattice. The structure of liquid water is very similar, but in the liquid, the hydrogen bonds are continually broken and formed because of rapid molecular motion. Because ice is less dense than liquid water, rivers, lakes, and oceans freeze from the top down. In fact, the ice forms a protective surface layer that insulates the rest of the water, allowing fish and other organisms to survive in the lower levels of a frozen lake or sea. If ice were denser than the liquid, the ice formed at the surface in cold weather would sink as fast as it formed. Bodies of water would freeze from the bottom up, which would be lethal for most aquatic creatures. The expansion of water when freezing also explains why automobile or boat engines must be protected by “antifreeze” and why unprotected pipes in houses break if they are allowed to freeze.

Water’s influence on the world around us is affected by these properties. Isn’t it fascinating that such a small molecule can have such a big impact?