In aldehydes and ketones, this charge separation leads to dipole-dipole interactions that are great enough to significantly affect the boiling points. Table \(\PageIndex{1}\) shows that the polar single bonds in ethers have little such effect, whereas hydrogen bonding between alcohol molecules is even stronger.

Although the lower members of the homologous series have pungent odors, many higher aldehydes have pleasant odors and are used in perfumes and artificial flavorings. As for the ketones, acetone has a pleasant odor, but most of the higher homologs have rather bland odors.

The oxygen atom of the carbonyl group engages in hydrogen bonding with a water molecule.

The solubility of aldehydes is therefore about the same as that of alcohols and ethers. Formaldehyde, acetaldehyde, and acetone are soluble in water. As the carbon chain increases in length, solubility in water decreases. The borderline of solubility occurs at about four carbon atoms per oxygen atom. All aldehydes and ketones are soluble in organic solvents and, in general, are less dense than water.

Oxidation of Aldehydes and Ketones

Aldehydes and ketones are much alike in many of their reactions, owing to the presence of the carbonyl functional group in both. They differ greatly, however, in one most important type of reaction: oxidation. Aldehydes are readily oxidized to carboxylic acids, whereas ketones resist oxidation.

The aldehydes are, in fact, among the most easily oxidized of organic compounds. They are oxidized by oxygen (\(\ce{O2}\)) in air to carboxylic acids.

The ease of oxidation helps chemists identify aldehydes. A sufficiently mild oxidizing agent can distinguish aldehydes not only from ketones but also from alcohols. Tollens’ reagent, for example, is an alkaline solution of silver (\(\ce{Ag^{+}}\)) ion complexed with ammonia (NH3), which keeps the \(\ce{Ag^{+}}\) ion in solution.

Deposited on a clean glass surface, the silver produces a mirror (Figure \(\PageIndex{1}\)). Ordinary ketones do not react with Tollens’ reagent. 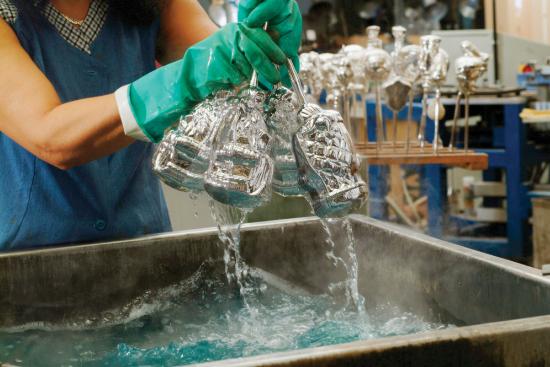 Figure \(\PageIndex{1}\): Aldehyde Reactions. A reaction related to the Tollens’ reaction is often used to silver mirrors. These ornaments were silvered by such a reaction. Glucose, a simple sugar with an aldehyde functional group, is used as the reducing agent. Source: Photo courtesy of Krebs Glas Lauscha, commons.wikimedia.org/wiki/File:Silvering.jpg. A person wearing gloves is holding a bunch of ornaments that she has just lifted from a basin containing a solution.

Although ketones resist oxidation by ordinary laboratory oxidizing agents, they undergo combustion, as do aldehydes.

Formaldehyde has an irritating odor. Because of its reactivity, it is difficult to handle in the gaseous state. For many uses, it is therefore dissolved in water and sold as a 37% to 40% aqueous solution called formalin. Formaldehyde denatures proteins, rendering them insoluble in water and resistant to bacterial decay. For this reason, formalin is used in embalming solutions and in preserving biological specimens.

Aldehydes are the active components in many other familiar substances. Large quantities of formaldehyde are used to make phenol-formaldehyde resins for gluing the wood sheets in plywood and as adhesives in other building materials. Sometimes the formaldehyde escapes from the materials and causes health problems in some people. While some people seem unaffected, others experience coughing, wheezing, eye irritation, and other symptoms.

The odor of green leaves is due in part to a carbonyl compound, cis-3-hexenal, which with related compounds is used to impart a “green” herbal odor to shampoos and other products.

Acetaldehyde is an extremely volatile, colorless liquid. It is a starting material for the preparation of many other organic compounds. Acetaldehyde is formed as a metabolite in the fermentation of sugars and in the detoxification of alcohol in the liver. Aldehydes are the active components of many other familiar materials (Figure \(\PageIndex{2}\)). Figure \(\PageIndex{2}\) Some Interesting Aldehydes. (a) Benzaldehyde is an oil found in almonds; (b) cinnamaldehyde is oil of cinnamon; (c) vanillin gives vanilla its flavor; (d) cis-3-hexenal provides an herbal odor; and (e) trans-2-cis-6-nonadienal gives a cucumber odor.

Acetone is the simplest and most important ketone. Because it is miscible with water as well as with most organic solvents, its chief use is as an industrial solvent (for example, for paints and lacquers). It is also the chief ingredient in some brands of nail polish remover.

To Your Health: Acetone in Blood, Urine, and Breath

Acetone is formed in the human body as a by-product of lipid metabolism. Normally, acetone does not accumulate to an appreciable extent because it is oxidized to carbon dioxide and water. The normal concentration of acetone in the human body is less than 1 mg/100 mL of blood. In certain disease states, such as uncontrolled diabetes mellitus, the acetone concentration rises to higher levels. It is then excreted in the urine, where it is easily detected. In severe cases, its odor can be noted on the breath.

Ketones are also the active components of other familiar substances, some of which are noted in the accompanying figure. Some ketones have interesting properties: (a) Butter flavoring comes from 2,3-butanedione; (b) β-ionone is responsible for the odor of violets; (c) muscone is musk oil, an ingredient in perfumes; and (d) camphor is used in some insect repellents.

Certain steroid hormones have the ketone functional group as a part of their structure. Two examples are progesterone, a hormone secreted by the ovaries that stimulates the growth of cells in the uterine wall and prepares it for attachment of a fertilized egg, and testosterone, the main male sex hormone. These and other sex hormones affect our development and our lives in fundamental ways.

The polar carbon-to-oxygen double bond causes aldehydes and ketones to have higher boiling points than those of ethers and alkanes of similar molar masses but lower than those of comparable alcohols that engage in intermolecular hydrogen bonding. Aldehydes are readily oxidized to carboxylic acids, whereas ketones resist oxidation.