Muscles are arranged in groupings of agonist, antagonist, and synergists that produce and modulate movement.

Muscles exist in groupings that work to produce movements by muscle contraction. Muscles are classified according to their actions during contractions as agonists, antagonists, or synergists.

For muscle pairings referred to as antagonistic pairs, one muscle is designated as the extensor muscle, which contracts to open the joint, and the flexor muscle, which acts opposite to the extensor muscle. These pairs exist in places in the body in which the body cannot return the limb back to its original position through simple lack of contraction. Typical muscle pairings include the biceps brachii and triceps brachii, which act to flex or extend the forearm.

Agonist muscles are those we typically associate with movement itself, and are thus sometimes referred to as prime movers. Agonist muscles produce the primary movement or series of movements through their own contractions. To generate a movement, agonist muscles must physically be arranged so that they cross a joint by way of the tendon. Contraction will move limbs associated with that joint. In this sense, the bone acts as a lever with the attached muscle fiber’s contraction, driving movement.

During flexing of the forearm the biceps brachii is the agonist muscle, pulling the forearm up towards the shoulder.

The majority of muscles are grouped in pairs, with an antagonist to each agonist muscle. Exceptions include those muscles such as sphincter muscles that act to contract in a way that is opposite to the resting state of the muscle. Antagonist muscles act as opposing muscles to agonists, usually contracting as a means of returning the limb to its original, resting position.

During flexing of the forearm, the triceps brachii is the antagonist muscle, resisting the movement of the forearm up towards the shoulder.

Synergist muscles act around a moveable joint to produce motion similar to or in concert with agonist muscles. They often act to reduce excessive force generated by the agonist muscle and are referred to as neutralizers. Synergists are useful because they fix certain joints to allow a range of contractions, in contrast with the sheer power of an agonist contraction that limits the range of possible movements.

During flexing of the forearm, the brachioradialis and brachialis act as synergist muscles, aiding the biceps brachii in pulling the forearm up towards the shoulder. The muscles of the rotator cuff are also synergists in that they fix the shoulder joint allowing the bicepps brachii to exert a greater force. 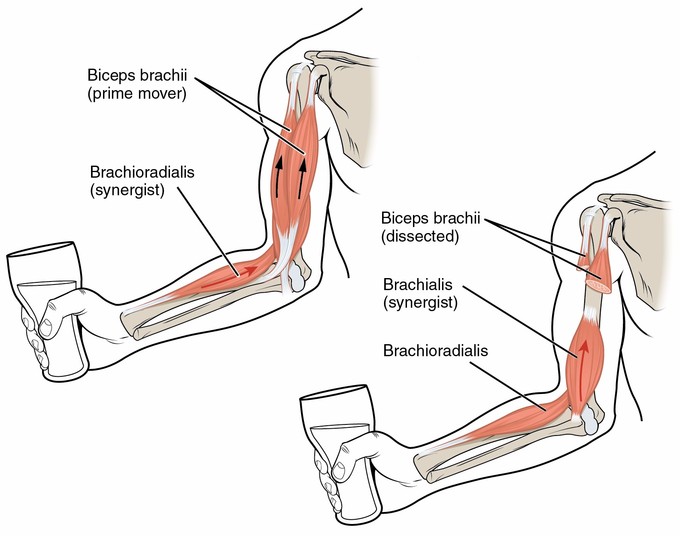