The eyes are the organs of sight. They consist of spherical eyeballs situated in deep depressions in the skull called the orbits. They are attached to the wall of the orbit by six muscles, which move the eyeball. Upper and lower eyelids cover the eyes during sleep and protect them from foreign objects or too much light, and spread the tears over their surface.

The nictitating membrane or haw is a transparent sheet that moves sideways across the eye from the inner corner, cleansing and moistening the cornea without shutting out the light. It is found in birds, crocodiles, frogs and fish as well as marsupials like the kangaroo. It is rare in mammals but can be seen in cats and dogs by gently opening the eye when it is asleep. Eyelashes also protect the eyes from the sun and foreign objects.

Structure of the Eye

Lining the eyelids and covering the front of the eyeball is a thin epithelium called the conjunctiva. Conjunctivitis is inflammation of this membrane. Tear glands that open just under the top eyelid secrete a salty solution that keeps the exposed part of the eye moist, washes away dust and contains an enzyme that destroys bacteria.

The wall of the eyeball is composed of three layers (see diagram 15.4). From the outside these are the sclera, the choroid and the retina.

The sclera is a tough fibrous layer that protects the eyeball and gives it rigidity. At the front of the eye the sclera is visible as the “white” of the eye, which is modified as the transparent cornea through which the light rays have to pass to enter the eye. The cornea helps focus light that enters the eye.

The choroid lies beneath the sclera. It contains a network of blood vessels that supply the eye with oxygen and nutrients. Its inner surface is highly pigmented and absorbs stray light rays. In nocturnal animals like the cat and possum this highly pigmented layer reflects light as a means of conserving light. This is what makes them shine when caught in car headlights.

At the front of the eye the choroid becomes the iris. This is the coloured part of the eye that controls the amount of light entering the pupil of the eye. In dim light the pupil is wide open so as much light as possible enters while in bright light the pupils contract to protect the retina from damage by excess light.

The pupil in most animals is circular but in many nocturnal animals it is a slit that can close completely. This helps protect the extra-sensitive light sensing tissues of animals like the cat and possum from bright sunlight.

The inner layer lining the inside of the eye is the retina. This contains the light sensing cells called rods and cones (see diagram 15.5).

The rod cells are long and fat and are sensitive to dim light but cannot detect colour. They contain large amounts of a pigment that changes when exposed to light. This pigment comes from vitamin A found in carrots etc. A deficiency of this vitamin causes night blindness. So your mother was right when she told you to eat your carrots as they would help you see in the dark!

The cone cells provide colour vision and allow animals to see details. Most are found in the centre of the retina and they are most densely concentrated in a small area called the fovea. This is the area of sharpest vision, where the words you are reading at this moment are focussed on your retina. 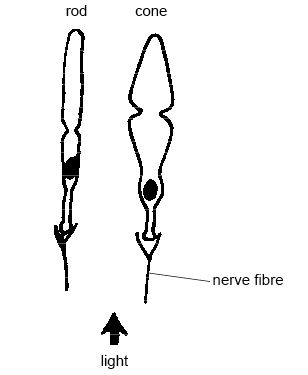 The nerve fibres from the cells of the retina join and leave the eye via the optic nerve. There are no rods or cones here and it is a blind spot. The optic nerve passes through the back of the orbit and enters the brain.

The lens is situated just behind the pupil and the iris. It is a crystalline structure with no blood vessels and is held in position by a ligament. This is attached to a muscle, which changes the shape of the lens so both near and distant objects can be focussed by the eye. This ability to change the focus of the lens is called accommodation. In many mammals the muscles that bring about accommodation are poorly developed, Rats, cows and dogs, for example, are thought to be unable to focus clearly on near objects.

In old age and certain diseases the lens may become cloudy resulting in blurred vision. This is called a cataract. Within the eyeball are two cavities, the anterior and posterior chambers, separated by the lens. They contain fluids the aqueous and vitreous humoursrespectively, that maintain the shape of the eyeball and help press the retina firmly against the choroid so clear images are seen.

How The Eye Sees

Eyes work quite like a camera. Light rays from an object enter the eye and are focused on the retina (the “film”) at the back of the eye. The cornea, the lens and the fluid within the eye all help to focus the light. They do this by bending the light rays so that light from the object falls on the retina. This bending of light is called refraction. The light stimulates the light sensitive cells of the retina and nerve impulses are produced that pass down the optic nerve to the brain (see diagram 15.6).

Diagram 15.6 - How the light travels from the object to the retina of the eye

As mentioned before, the retina has two different kinds of cells that are stimulated by light - 'rods' and 'cones'. In humans and higher primates like baboons and gorillas the rods function in dim light and do not perceive colour, while the cones are stimulated by bright light and perceive details and colour.

Other mammals have very few cones in their retinas and it is believed that they see no or only a limited range of colour. It is, of course, difficult to find out exactly what animals do see. It is thought that deer, rats, and rabbits and nocturnal animals like the cat are colour-blind, and dogs probably see green and blue. Some fish and most birds seem to have better colour vision than humans and they use colour, often very vivid ones, for recognizing each other as well as for courtship and protection.

Animals like cats that hunt have eyes placed on the front of the head in such a way that both eyes see the same wide area but from slightly different angles (see diagram 15.7). This is called binocular vision. Its main advantage is that it enables the animals to estimate the distance to the prey so they can chase it and pounce accurately.

In contrast plant-eating prey animals like the rabbit and deer need to have a wide panoramic view so they can see predators approaching. They therefore have eyes placed on the side of the head, each with its own field of vision (see diagram 15.8). They have only a very small area of binocular vision in front of the head but are extremely sensitive to movement. 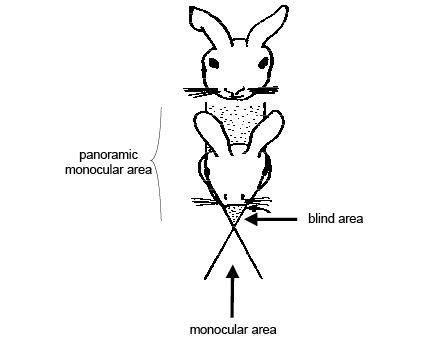 Diagram 15.8 - Panoramic monocular vision in prey animals like the rabbit