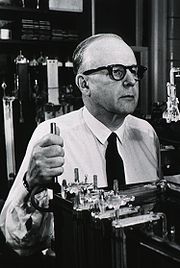 Biotin is necessary for cell growth, the production of fatty acids, and the metabolism of fats and amino acids.[2] Biotin assists in various metabolic reactions involving the transfer of carbon dioxide. It may also be helpful in maintaining a steady blood sugar level. Biotin is often recommended as a dietary supplement for strengthening hair and nails, though scientific data supporting this outcome are weak.[2] Nevertheless, biotin is found in many cosmetics and health products for the hair and skin.[3][4]

Biotin deficiency is rare. The amounts needed are small, a wide range of foods contain biotin, and intestinal bacteria synthesize biotin, which is then absorbed by the host animal. For that reason, statutory agencies in many countries, for example the USA[5] and Australia,[6] have not formally established a recommended daily intake of biotin. Instead, an Adequate Intake (AI) is identified based on the theory that average intake meets needs. Future research could result in biotin AIs with EARs and RDAs (see Dietary Reference Intake section).

A number of rare metabolic disorders exist in which an individual's metabolism of biotin is abnormal, such as deficiency in the holocarboxylase synthetase enzyme which covalently links biotin onto the carboxylase, where the biotin acts as a cofactor.[7]

Biotin has an unusual structure (see above figure), with two rings fused together via one of their sides. The two rings are ureido and thiophene moieties. Biotin is a heterocyclic, S-containing monocarboxylic acid. It is made from two precursors, alanine and pimeloyl-CoA via three enzymes. 8-Amino-7-oxopelargonic acid synthase is a pyridoxal 5'-phosphate enzyme. The pimeloyl-CoA, could be produced by a modified fatty acid pathway involving a malonyl thioester as the starter. 7,8Diaminopelargonic acid (DAPA) aminotransferase is unusual in using S-adenosyl methionine (SAM) as the NH2 donor. Dethiobiotin synthetase catalyzes the formation of the ureido ring via a DAPA carbamate activated with ATP. Biotin synthase reductively cleaves SAM into a deoxyadenosyl radical—a first radical formed on dethiobiotin is trapped by the sulfur donor, which was found to be the iron-sulfur (Fe-S) center contained in the enzyme.[8]

D-(+)-Biotin is a cofactor responsible for carbon dioxide transfer in several carboxylase enzymes:

Biotin is important in fatty acid synthesis, branched-chain amino acid catabolism, and gluconeogenesis.[2] It covalently attaches to the epsilon-amino group of specific lysine residues in these carboxylases. This biotinylation reaction requires ATP and is catalyzed by holocarboxylase synthetase.[9] In bacteria, biotin is attached to biotin carboxyl carrier protein (BCCP) by biotin protein ligase (BirA in E. coli).[10] The attachment of biotin to various chemical sites, biotinylation, is used as an important laboratory technique to study various processes, including protein localization, protein interactions, DNA transcription, and replication. Biotinidase itself is known to be able to biotinylate histone proteins,[11] but little biotin is found naturally attached to chromatin.

Biotin binds tightly to the tetrameric protein avidin (also streptavidin and neutravidin), with a dissociation constant Kd on the order of 10−15 M, which is one of the strongest known protein-ligand interactions.[12] This is often used in different biotechnological applications. Until 2005, very harsh conditions were thought to be required to break the biotin-streptavidin bond.[13]

The Food and Nutrition Board of the U.S. Institute of Medicine updated Estimated Average Requirements (EARs) and Recommended Dietary Allowances (RDAs) for B vitamins in 1998. At that time there was not sufficient information to establish EARs and RDAs for biotin. In instances such as this, the Board sets Adequate Intakes (AIs), with the understanding that at some later date, AIs will be replaced by more exact information. The current AI for adults ages 19 and up is 30 μg/day. AI for pregnancy is 30 μg/day. AI for lactation is 35 μg/day. For infants up to 12 months the AI is 5-6 μg/day For children ages 1–18 years the AI increases with age from 8 to 25 μg/day.[14]

As for safety, the FNB sets Tolerable Upper Intake Levels (known as ULs) for vitamins and minerals when evidence is sufficient. In the case of biotin there is no UL, as there is insufficient human data to identify adverse effects from high doses. The European Food Safety Authority reviewed the same safety question and also reached the conclusion that there was not sufficient evidence to set a UL for biotin.[15] Collectively the EARs, RDAs, AIs and ULs are referred to as Dietary Reference Intakes.

For U.S. food and dietary supplement labeling purposes the amount in a serving is expressed as a percent of Daily Value (%DV). For biotin labeling purposes 100% of the Daily Value was 300 μg, but as of May 2016 it has been revised to 30 μg to bring it into agreement with the AI. A table of the pre-change adult Daily Values is provided at Reference Daily Intake. Food and supplement companies have until July 2018 to comply with the change.

Biotin is synthesized by intestinal bacteria, but there is a lack of good quality studies about how much biotin they provide.[16] Biotin is stable at room temperature and isn’t destroyed by cooking. Some of the best sources are (content per 100 grams): [17]

Egg whites contain a protein (avidin) that blocks the absorption of biotin, so people who regularly consume a large number of eggs may become biotin-deficient.[18] The dietary biotin intake in Western populations has been estimated to be 35 to 70 micrograms per day (143–287 nmol per day).[19] Biotin is also available in dietary supplements in which a dose of 30 micrograms meets 100% of the Daily Value for adults.[16][19]

Import into the cell

In mammals biotin is imported into cells by the Na+-dependent multivitamin (pantothenate, biotin, lipoate) transporter (SMVT).[20] In bacteria, several families of proteins, especially the BioY family of transporters, imports biotin into cells.[21]

Biotin is also called vitamin H (the H represents Haar und Haut, German words for "hair and skin") or vitamin B7. Studies on its bioavailability have been conducted in rats and in chicks. Based on these studies, biotin bioavailability may be low or variable, depending on the type of food being consumed. In general, biotin exists in food as protein-bound form or biocytin.[22] Proteolysis by protease is required prior to absorption. This process assists free biotin release from biocytin and protein-bound biotin. The biotin present in corn is readily available; however, most grains have about a 20-40% bioavailability of biotin.[23]

The frequency of marginal biotin status is not known, but the incidence of low circulating biotin levels in alcoholics has been found to be much greater than in the general population. Also, relatively low levels of biotin have been reported in the urine or plasma of patients who have had a partial gastrectomy or have other causes of achlorhydria, burn patients, epileptics, elderly individuals, and athletes.[23]Pregnancy and lactation may be associated with an increased demand for biotin. In pregnancy, this may be due to a possible acceleration of biotin catabolism, whereas, in lactation, the higher demand has yet to be elucidated. Recent studies have shown marginal biotin deficiency can be present in human gestation, as evidenced by increased urinary excretion of 3-hydroxyisovaleric acid, decreased urinary excretion of biotin and bisnorbiotin, and decreased plasma concentration of biotin. Additionally, smoking may further accelerate biotin catabolism in women.[24]

The neurological and psychological symptoms can occur with only mild deficiencies. Dermatitis, conjunctivitis, and hair loss will generally occur only when deficiency becomes more severe.[2]

Individuals with hereditary disorders of biotin deficiency have evidence of impaired immune system function, including increased susceptibility to bacterial and fungal infections.[25]

Biotinidase deficiency is not due to inadequate biotin, but rather to a deficiency in the enzymes that process it. Biotinidase catalyzes the cleavage of biotin from biocytin and biotinyl-peptides (the proteolytic degradation products of each holocarboxylase) and thereby recycles biotin. It is also important in freeing biotin from dietary protein-bound biotin.[26] General symptoms include decreased appetite and growth. Dermatologic symptoms include dermatitis, alopecia, and achromotrichia (absence or loss of pigment in the hair). Perosis (a shortening and thickening of bones) is seen in the skeleton. Fatty liver and kidney syndrome and hepatic steatosis also can occur.[23]

As one of the strongest non-covalent interactions, the binding of biotin to streptavidin is commonly used as the target molecular interaction in the research of biosensors and cell sorting.[28][29]

ELISAs often make use of biotinylated detection antibodies against the antigen of interest, followed by a detection step using streptavidin conjugated to a reporter molecule, such as horseradish peroxidase or alkaline phosphatase.

Animal studies have indicated few, if any, effects due to high level doses of biotin. This may provide evidence that both animals and humans could tolerate doses of at least an order of magnitude greater than each of their nutritional requirements. There are no reported cases of adverse effects from receiving high doses of the vitamin, in particular, when used in the treatment of metabolic disorders causing seborrheic dermatitis in infants.[30] However, excess biotin accumulation can inhibit endogenous sirtuin activity leading to increased inflammation, cellularity, and collagen deposition, and may be partly responsible for age related metabolic problems. Reversed by calorie restriction in mice.[31]