Total maxillectomy refers to surgical resection of the entire maxilla. Resection includes the floor and medial wall of the orbit and the ethmoid sinuses. The surgery may be extended to include orbital exenteration and sphenoidectomy, and resection of the pterygoid plates. It is generally indicated for malignancy involving the maxillary sinus, maxillary bone (sarcomas) and/or orbit and ethmoids, not amenable to lesser or endoscopic resection.

Total maxillectomy is potentially complicated by injury to the orbital contents, lacrimal drainage, optic nerve, ethmoidal arteries, intracranial contents, and may be accompanied by brisk bleeding. A sound understanding of the 3-dimensional anatomy of the maxilla and the surrounding structures is therefore essential. Hence the detailed description of the surgical anatomy that follows. Figure 1: Lateral view of maxilla with windows cut in lateral and medial walls of maxillary sinus Figure 2: Bony anatomy of the lateral wall of the nose

Figure 2 illustrates the bony anatomy of the lateral wall of the nose. The inferior turbinate (concha) is resected with a total maxillectomy, but the middle turbinate is generally preserved, unless involved by pathology. Figure 3 demonstrates the anatomy of the medial wall of the nose in a cadaveric skull. Note in particular the thin lamina papyracea, the lacrimal fossa, the frontoethmoidal suture line and the anterior and posterior ethmoidal foramina and the infraorbital foramen.

Figure 4 illustrates the coronal anatomy at the level of the anterior extent of a total maxillectomy. Specifically note the lacrimal sac, which is transected at surgery in the lacrimal fossa, and the relative heights of the floors of the antrum and the nasal cavity.

Figure 5: Anatomy in the coronal plane through the anterior ethmoids midway along a maxillectomy

Figure 5 demonstrates the coronal anatomy midway back along a total maxillectomy. Specifically note the infraorbital nerve in the orbital floor, the thin lamina papyracea and the relative heights of the floors of the antrum and the nasal cavity. 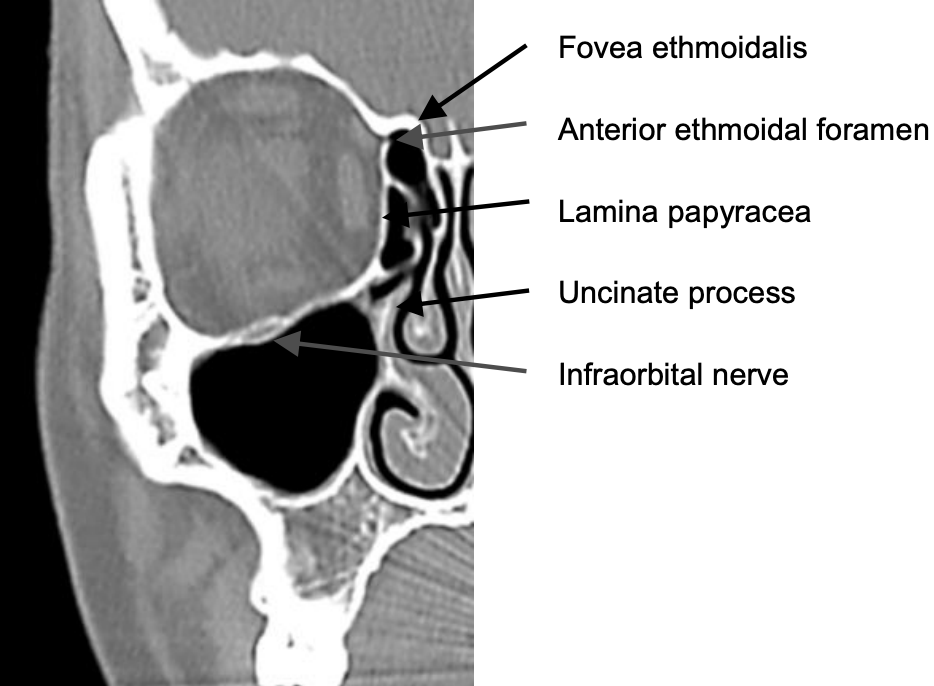 Figure 6: Note the position of the anterior ethmoidal artery where it passes through its foramen which is located in the frontoethmoidal suture line Figures 6 & 7 illustrate the value of using the anterior and posterior ethmoidal arteries and frontoethmoidal suture line to determine the level of the floor of the anterior cranial fossa when opening the lamina papyracea from the orbital side during total maxillectomy.

Figure 8 demonstrates the coronal anatomy immediately posterior to the maxillary sinus, which is in the plane through which a total maxillectomy is done, and in which the internal maxillary artery and its branches as well as the sphenopalatine ganglion and its branches are encountered within the pterygopalatine fossa. The pterygopalatine fossa communicates laterally with the infratemporal fossa via the pterygomaxillary fissure, and medially with the nasal cavity via the sphenopalatine foramen. Figures 9 & 10 illustrate axial views of the anatomy of the maxillary sinus. The posterior resection line of total maxillectomy passes through the pterygopalatine fossa and pterygomaxillary fissure and the anterior aspect of the pterygoid plates. 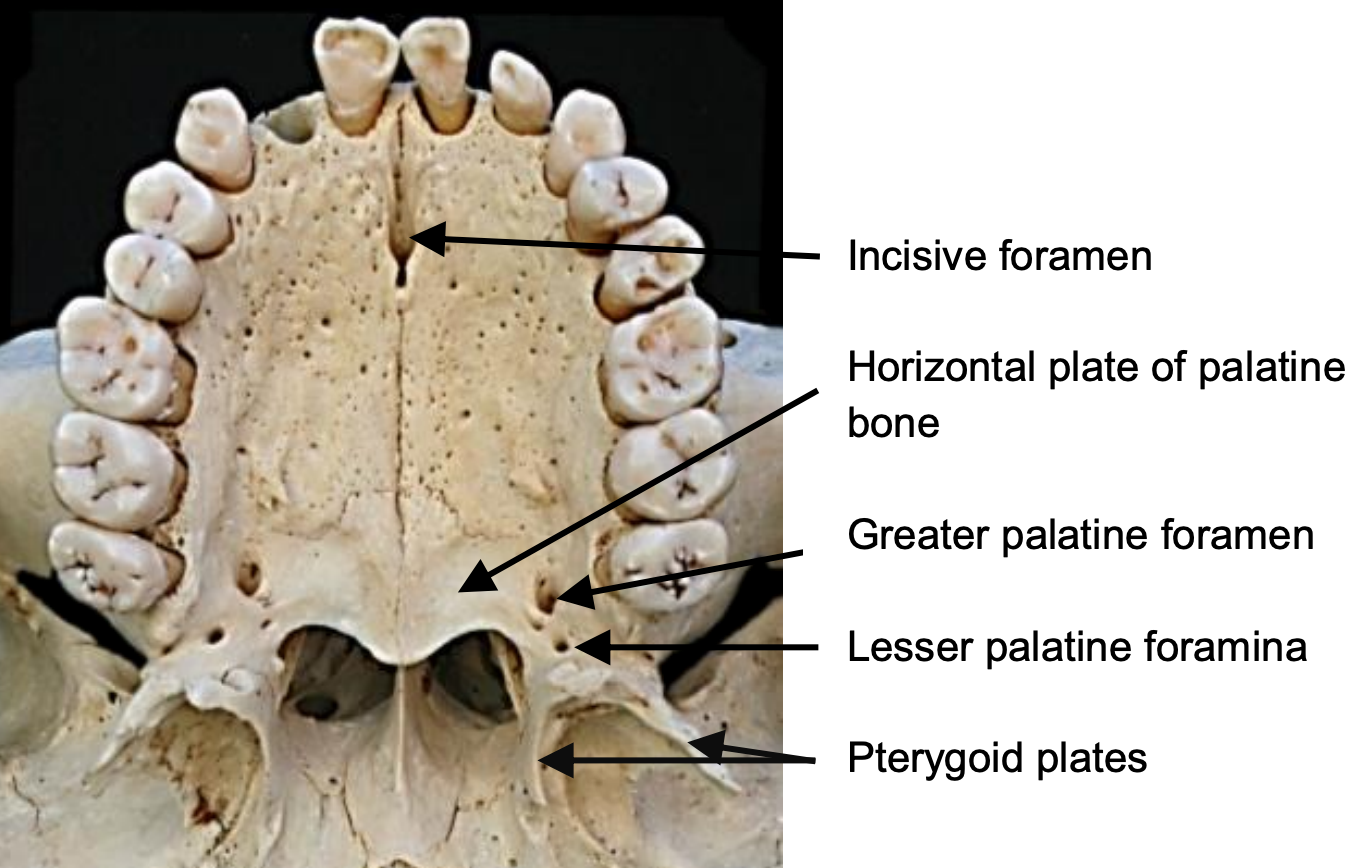 The bony anatomy of the hard palate is illustrated in Figure 11. 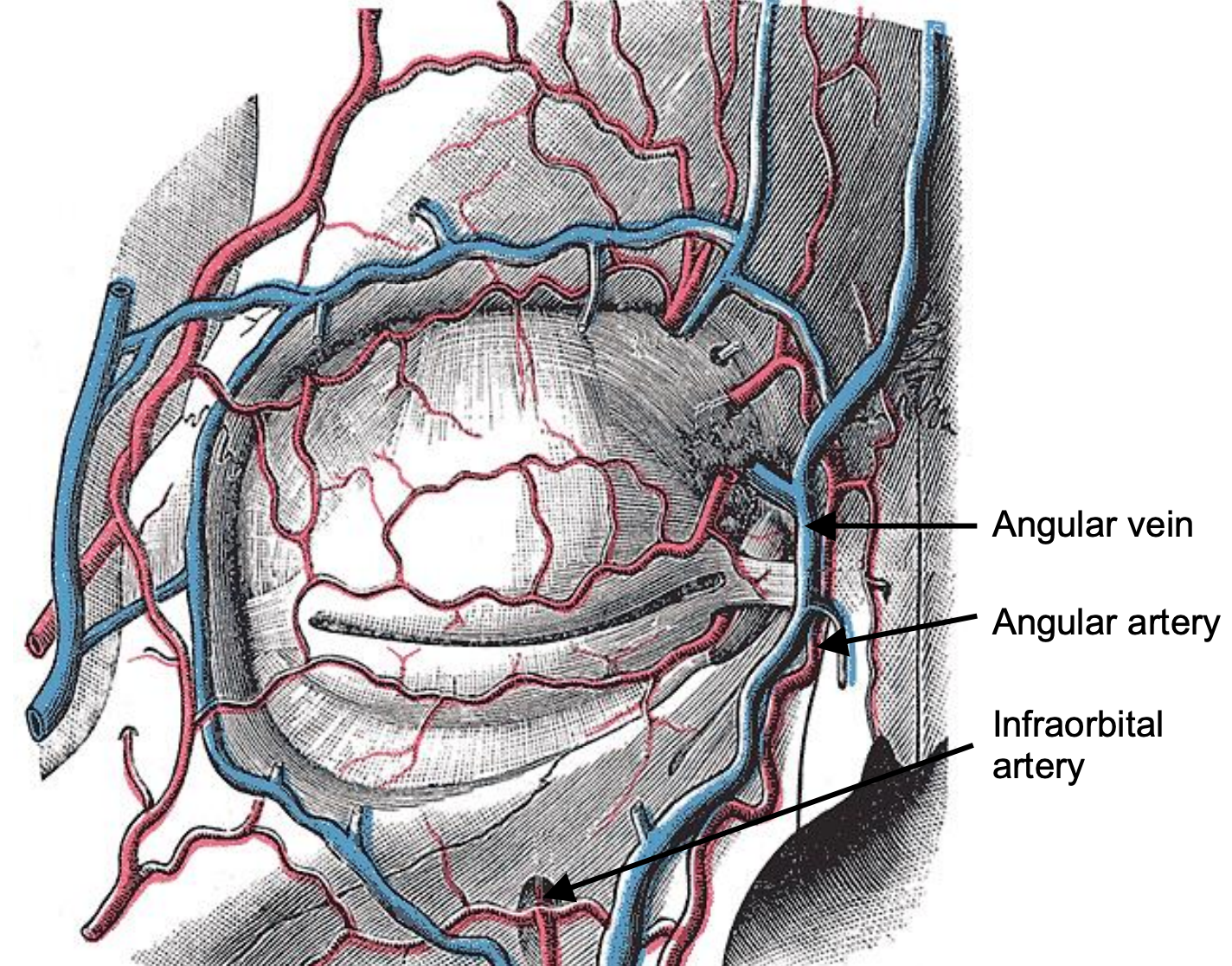 Figure 12: Vasculature around the orbit

An understanding of the blood supply of the maxilla permits the surgeon to anticipate when and where to encounter bleeding, and to plan the sequence of the surgery to reserve the bloodier parts of the surgery until last so as to minimize blood loss and to avoid blood obscuring the surgical field. The only significant vein encountered during maxillectomy is the angular vein (Figure 12) at the medial canthus. Figure 13: Facial artery and origin of internal maxillary artery, both branches of the external carotid artery The blood supply to the maxilla and paranasal sinuses originates both from the external (Figures 13, 14) and internal carotid artery systems.

The arterial supply relevant to maxillectomy is as follows:

Branches of the internal maxillary artery of surgical significance include:

Figure 16: Branches of internal maxillary artery; blue shaded area is the 2nd part of artery before it enters the pterygopalatine fossa

Branches of the internal carotid artery of surgical significance are:

The maxillary division of V (V2) enters the pterygopalatine fossa via foramen rotundum. The only branch of surgical significance is the infraorbital nerve. It runs in the floor of the orbit/roof of the antrum to exit from the infraorbital foramen (Figure 3, 17). The only other major nerve that has to be considered at maxillectomy is the optic nerve.

CT scanning is an important means of determining the superior (orbit and roof of ethmoids), posterior (pterygoid plates), lateral (zygoma and infratemporal fossa) and medial extent of the tumor and the resection required.

Preoperative consent includes discussing the need for a tracheostomy, the facial incisions, loss of sensation in the infraorbital nerve distribution, diplopia, epiphora, enophthalmos, telecanthus, potential injury to the optic nerve, and CSF leak.

The operation is done under general anesthesia, with orotracheal intubation. If the eye is to be preserved then eyelids are sutured together with 6/0 silk taking care not to invert the eyelashes so as to avoid corneal abrasions, unless an orbital exenteration is planned. A tracheostomy is then done. Perioperative broad spectrum antibiotics are administered for 24 hours. Local anesthetic with vasoconstrictor is injected along the planned skin incisions. The nasal cavity is decongested with a topical vasoconstrictor.

The operation may be considered in 3 stages: soft tissue dissection & bone exposure; bone resection; and closure/reconstruction.

It is important to complete the soft tissue dissection and bone exposure before doing any bone work so as to avoid excessive blood loss.

At this point the soft tissue dissection is complete. The bony part of the maxillectomy can now been done.

The extent of the bony resection is tailored to the primary tumor and may include the lateral wall of the orbit and zygoma, especially if the antrum is seen to extend into the zygoma on CT imaging. Figures 28 – 30 illustrate the extent of the bone resection following a classic total maxillectomy.

The sequence of the osteotomies is planned to reserve troublesome bleeding to the end of the procedure (Figure 31 - 35). It may need to be adjusted depending on the location and extent of the tumor. The maxillectomy specimen can now be gently down-fractured.

The specimen is removed and inspected to determine the adequacy of the tumor resection (Figure 37).

The remnants of the ethmoids are carefully inspected. An external ethmoidectomy may safely be completed up to the cribriform plate (Figures 29, 30, 38-40). The need for external frontoethmoidectomy +/- sphenoidectomy is determined, and evidence of a CSF leak is excluded.

Arterial and venous bleeding occur from the pterygoid venous plexus it may initially be controlled with packing. Meticulous hemostasis is achieved with bipolar cautery, suture ligatures, clips, bone wax, and topical hemostatics.

Figures 38-41 demonstrate total maxillectomy defects. Note the location of the face of the sphenoid sinus that may be opened and stripped of mucosa for oncological reasons.

The objectives of closure and reconstruction are to prevent epiphora, to separate the oral cavity from the nose and orbit, to preserve the facial contours, to minimize enophthalmos and diplopia, to maintain a nasal airway, and to restore dentition.

Epiphora: The lacrimal sac is slit along its length and marsupialized by suturing its edges to the surrounding soft tissue with vicryl sutures.

Oronasal separation may be achieved in several ways:

The inner aspect of the maxillectomy cavity is lined with a split-thickness skin graft, which is kept in place with an antiseptic-impregnated gauze pack. The pack is retained with overlying sutures or by screwing a prefashioned plate to the remaining palate with lag screws. A circumferential scar band develops at the interface between the skin graft and the remaining gingivobuccal mucosa and aids to secure the obturator. A temporary obturator may be fitted after the gauze is removed on Day 5. The obturator is remolded as the cavity heals and contracts.

Facial contour: Other than the temporalis muscle flap, all the techniques listed above under “oronasal separation” achieve this objective.

Enophthalmos, diplopia: Suture tears in the periorbita to avoid herniation of orbital fat. It is not unusual for patients to complain of some diplopia, but this usually improves with the passage of time. A degree of enophthalmos is to be expected unless the medial and inferior walls of the orbit are carefully reconstructed. If an extended resection of the orbital floor has been done, then consideration should be given to reconstructing the floor with fascia, bone or titanium mesh (Figure 44).

The patient depicted in Figures 46a-c required resection of overlying skin and soft tissues, infratemporal fossa and orbit, as well as nodal metastases to the parotid and neck. The defect was reconstructed with an anterolateral free thigh flap.

Orbital exenteration is generally indicated when tumor has extended through periosteum to involve fat (Figure 46, 47) and/or muscle and/or the globe; the eyelids; and the lacrimal apparatus. Involvement limited to the bone or periosteum can be managed by resecting the involved periosteum.

Whenever possible the eyelids are preserved (lid-sparing cf. lid-sacrificing exenteration) so they may be sutured together at completion of the surgery by making palpebral incisions just above and below the eyelashes. The skin is then elevated from the tarsal plates with monopolar cautery up to the orbital rims circumferentially.

The periosteum is incised circumferentially just medial to the orbital rim, exposing the underlying bone. Take care not to injure the supraorbital nerve so as to preserve sensation to the forehead.

Next the orbital contents are mobilized in the relatively avascular subperiosteal plane inferiorly, laterally and superiorly. This is achieved by simply stripping the periosteum from the bone with e.g. a Freer’s dissector, other than along the inferior orbital fissure where the tissues are divided with scissors.

All that remains is to transect the ocular muscles and optic nerve and ophthalmic vessels at the orbital apex. Avoid undue traction on the optic nerve as this can injure the contralateral optic nerve. Exposure may be improved by decompressing the globe with a large bore needle. Use curved scissors (curved almost to 900) to transect the orbital apex and to deliver the orbital contents. Pack the orbit for a few minutes, and then use bipolar cautery or a ligature to control the brisk bleeding from the ophthalmic artery.

The orbital cavity may be managed in a number of ways. Patients may be left with the orbital cavity exposed +/- an (immobile) ocular prosthesis. When wearing a prosthesis is not an option, patients prefer to have the cavity filled with a flap.

Figure 51a: Osteosarcoma of maxilla