Since we have learned that neurons contain channels, receptors and transporters in Unit 1, one of the most useful parameters that neuroscientists examine, involves determining the movement of ions and the resultant modulation of neuronal membrane potential. Specifically, electrophysiological techniques used in excitable tissues rely on the ionic conductance of ion-channels and how these influence changes in the membrane potential of the cell being examined. Various electrophysiology techniques have been developed to detect and manipulate ion-channel function and/or action potential generation. Determining when to use each electrophysiological technique depends on many different factors including the biophysical properties of the recorded cell, the type of tissue being examined, the use of current- and/or voltage-clamp, whether the intra- and/or extracellular environments will be modulated in the experiments, and most importantly whether a single channel or several ion channels will be recorded.

The most common method used to assess ion-channel function is known as the patch-clamp electrophysiological technique that was developed in the 1970s by Nobel Prize Laureates Erwin Neher and Bert Sakmann. The patch-clamp technique allows a researcher to measure the biophysical properties of ion-channels on millisecond timescales. Patch clamp requires the initial formation of a Giga-ohm (GΩ) seal between the plasma membrane and the blunt tip (0.5–2 μm in diameter) of a heat-polished glass or quartz micropipette (electrode). Once a Giga-ohm seal has been created, this ‘cell-attached configuration” (Figure \(\PageIndex{1}\).) maintains the integrity of the plasma membrane (i.e. the membrane seal is not ruptured) preventing the intracellular solution inside the micropipette from dialyzing into the cell. However, this also restricts electrical access to the cell intracellular space resulting in an inability to control the membrane potential of the cell. In this configuration, only the patch membrane potential relative to the cell’s resting potential can be directly controlled. By altering either the magnitude of the seal resistance (a loose seal vs. tight seal) and/or whether the recording electrode is current- vs. voltage-clamped, the cell-attached configuration can be used to measure single channel currents, spontaneous neuronal cell firing and synaptic potentials as well as evoked action potentials within the cell. The other main advantage of this configuration is that although it is limited for the reasons outlined above, this configuration is the starting point for the majority of the types of patch-clamp recordings. 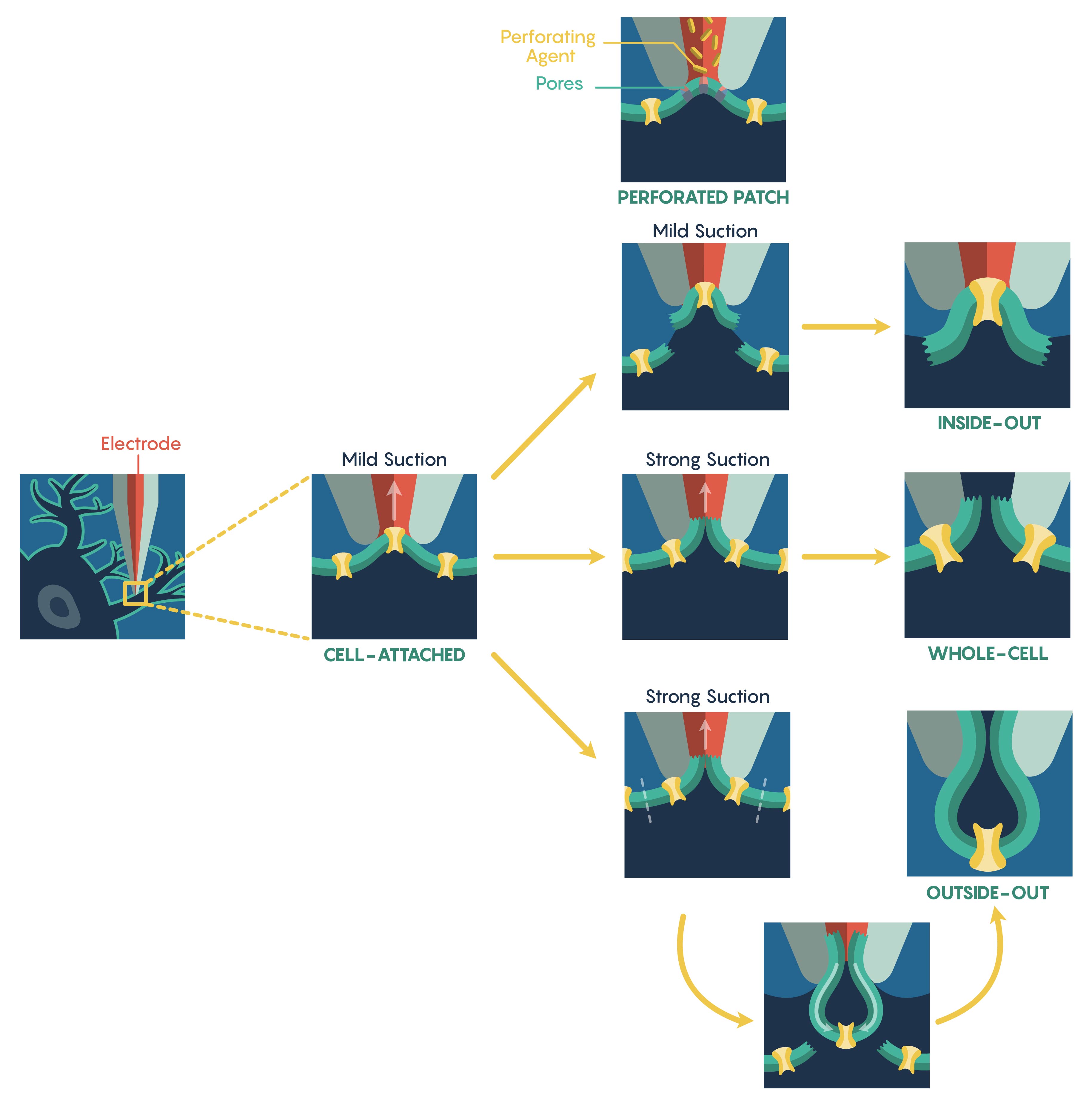 An alternative approach to the perforated patch technique is to apply a strong suction, or brief voltage transient, after Giga-ohm seal formation in order to rupture the intact plasma membrane. Upon rupture, a low-resistance electrical and physical continuity is established between the pipette and the cell interior and this new configuration is known as the whole-cell configuration (Figure \(\PageIndex{1}\).). Accordingly, this configuration permits direct measurements of the cell’s membrane potential (via current-clamp) and its manipulation (via voltage-clamp). Due to the physical continuity between the cell interior and the pipette solution, the cytosolic contents can be reasonably controlled. Furthermore, unlike the perforated patch, pharmacological or ionic manipulations of both the intracellular and extracellular environment can lead to the eulicidation of individual ion-currents. However, this physical continuity between the pipette lumen and cytosol may also dialyze out and/or alter the activity of endogenous second messenger systems. Thus, whole cell recordings are vulnerable to this limitation and it is critical to assess current ‘rundown’ of the system and cells within these types of whole-cell recording systems.

It is also possible to create ‘Cell-free’ variations of patch-clamp techniques also exist. For instance, upon giga-seal formation, the electrode can be gently retracted pulling the membrane patch into the bath solution. This arrangement, known as the inside-out configuration (Figure \(\PageIndex{1}\).), enables the complete manipulation of the cytoplasmic face of the plasma membrane via the bath perfusion – a feature not possible in the cell-attached configuration. As a result, inside-out patches allow for the manipulation the immediate environment of the inner membrane face. Unfortunately, this arrangement suffers from the loss of intracellular signaling pathways acting on the ion-channels following patch excision; a particularly important consideration when examining altered channel activity.

Similarly, an outside-out patch (Figure \(\PageIndex{1}\).) also requires the gentle retraction of the patch electrode from the whole-cell configuration. However, in this situation the pipette retraction forces the plasma membrane surrounding the electrode tip to detach from the cell and reseal forming a cell-independent patch whose extracellular membrane is facing the bathing solution. This allows an experimenter to have complete control over the intracellular environment and can rapidly exchange different external physiological or pharmacologic drugs over the same patch.