In biology, manganese(II) ions function as cofactors for a large variety of enzymes with many functions.[3] Manganese enzymes are particularly essential in detoxification of superoxide free radicals in organisms that must deal with elemental oxygen. Manganese also functions in the oxygen-evolving complex of photosynthetic plants. The element is a required trace mineral for all known living organisms but is a neurotoxin. In larger amounts, and apparently with far greater effectiveness through inhalation, it can cause a poisoning in mammals with neurological damage that is sometimes irreversible. 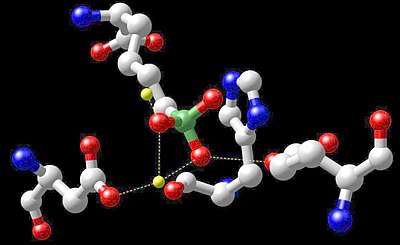 Reactive center of arginase with boronic acid inhibitor – the manganese atoms are shown in yellow.

Manganese is an important element for human health, essential for development, metabolism, and the antioxidant system. Nevertheless, excessive exposure or intake may lead to a condition known as manganism, a neurodegenerative disorder that causes dopaminergic neuronal death and symptoms similar to Parkinson's disease.[24][47] The classes of enzymes that have manganese cofactors is large and includes oxidoreductases, transferases, hydrolases, lyases, isomerases, ligases, lectins, and integrins. The reverse transcriptases of many retroviruses (though not lentiviruses such as HIV) contain manganese. The best-known manganese-containing polypeptides may be arginase, the diphtheria toxin, and Mn-containing superoxide dismutase (Mn-SOD).[48]

Mn-SOD is the type of SOD present in eukaryotic mitochondria, and also in most bacteria (this fact is in keeping with the bacterial-origin theory of mitochondria). The Mn-SOD enzyme is probably one of the most ancient, for nearly all organisms living in the presence of oxygen use it to deal with the toxic effects of superoxide (O−
2), formed from the 1-electron reduction of dioxygen. The exceptions, which are all bacteria, include Lactobacillus plantarum and related lactobacilli, which use a different nonenzymatic mechanism with manganese (Mn2+) ions complexed with polyphosphate, suggesting a path of evolution for this function in aerobic life.

The manganese Adequate Intake for a 44 year old human male is 2.3 mg per day, for a woman of the same age 1.8 mg, with 11 mg estimated as the tolerable upper limit for daily intake to avoid toxicity. AIs for children are less.[49] The essential minimum intake is unknown since manganese deficiency is so rare.[50][51] The human body contains about 12 mg of manganese, mostly in the bones. The soft tissue remainder is concentrated in the liver and kidneys.[24] In the human brain, the manganese is bound to manganese metalloproteins, most notably glutamine synthetase in astrocytes.[52]

Manganese is also important in photosynthetic oxygen evolution in chloroplasts in plants. The oxygen-evolving complex (OEC) is a part of photosystem II contained in the thylakoid membranes of chloroplasts; it is responsible for the terminal photooxidation of water during the light reactions of photosynthesis, and has a metalloenzyme core containing four atoms of manganese.[53][54] To fulfill this requirement, most broad-spectrum plant fertilizers contain manganese.

Manganese compounds are less toxic than those of other widespread metals, such as nickel and copper.[55] However, exposure to manganese dusts and fumes should not exceed the ceiling value of 5 mg/m3 even for short periods because of its toxicity level.[56]Manganese poisoning has been linked to impaired motor skills and cognitive disorders.[57]

The permanganate exhibits a higher toxicity than the manganese(II) compounds. The fatal dose is about 10 g, and several fatal intoxications have occurred. The strong oxidative effect leads to necrosis of the mucous membrane. For example, the esophagus is affected if the permanganate is swallowed. Only a limited amount is absorbed by the intestines, but this small amount shows severe effects on the kidneys and on the liver.[58][59]

In 2005, a study suggested a possible link between manganese inhalation and central nervous system toxicity in rats.[60]

Manganese exposure in United States is regulated by the Occupational Safety and Health Administration (OSHA).[61] People can be exposed to manganese in the workplace by breathing it in or swallowing it. OSHA has set the legal limit (permissible exposure limit) for manganese exposure in the workplace as 5 mg/m3 over an 8-hour workday. The National Institute for Occupational Safety and Health (NIOSH) has set a recommended exposure limit (REL) of 1 mg/m3 over an 8-hour workday and a short term limit of 3 mg/m3. At levels of 500 mg/m3, manganese is immediately dangerous to life and health.[62]

Manganese overexposure is most frequently associated with manganism, a rare neurological disorder associated with excessive manganese ingestion or inhalation. Historically, persons employed in the production or processing of manganese alloys[69][70] have been at risk for developing manganism; however, current health and safety regulations protect workers in developed nations.[61] The disorder was first described in 1837 by British academic John Couper, who studied two patients who were manganese grinders.[21]

Manganism is a biphasic disorder. In its early stages, an intoxicated person may experience depression, mood swings, compulsive behaviors, and psychosis. Early neurological symptoms give way to late-stage manganism, which resembles Parkinson's disease. Symptoms include weakness, monotone and slowed speech, an expressionless face, tremor, forward-leaning gait, inability to walk backwards without falling, rigidity, and general problems with dexterity, gait and balance.[21][71] Unlike Parkinson's disease, manganism is not associated with loss of smell and patients are typically unresponsive to treatment with L-DOPA.[72] Symptoms of late-stage manganism become more severe over time even if the source of exposure is removed and brain manganese levels return to normal.[71]

Animal experiments have given the opportunity to examine the consequences of manganese overexposure under controlled conditions. In (non-aggressive) rats, manganese induces mouse-killing behavior.[73]

Several recent studies attempt to examine the effects of chronic low-dose manganese overexposure on child development. The earliest study was conducted in the Chinese province of Shanxi. Drinking water there had been contaminated through improper sewage irrigation and contained 240–350 µg Mn/L. Although Mn concentrations at or below 300 µg Mn/L were considered safe at the time of the study by the US EPA and 400 µg Mn/L by the World Health Organization, the 92 children sampled (between 11 and 13 years of age) from this province displayed lower performance on tests of manual dexterity and rapidity, short-term memory, and visual identification, compared to children from an uncontaminated area. More recently, a study of 10-year-old children in Bangladesh showed a relationship between Mn concentration in well water and diminished IQ scores. A third study conducted in Quebec examined school children between the ages of 6 and 15 living in homes that received water from a well containing 610 µg Mn/L; controls lived in homes that received water from a 160 µg Mn/L well. Children in the experimental group showed increased hyperactive and oppositional behavior.[64]