Copper is essential to all living organisms as a trace dietary mineral because it is a key constituent of the respiratory enzyme complex cytochrome c oxidase. In molluscs and crustaceans, copper is a constituent of the blood pigment hemocyanin, replaced by the iron-complexed hemoglobin in fish and other vertebrates. In humans, copper is found mainly in the liver, muscle, and bone.[6] The adult body contains between 1.4 and 2.1 mg of copper per kilogram of body weight.[7]

Copper proteins have diverse roles in biological electron transport and oxygen transportation, processes that exploit the easy interconversion of Cu(I) and Cu(II).[122][123][124] [125] The biological role for copper commenced with the appearance of oxygen in earth's atmosphere.[126]

Copper is essential in the aerobic respiration of all eukaryotes. In mitochondria, it is found in cytochrome c oxidase, which is the last protein in oxidative phosphorylation. Cytochrome c oxidase is the protein that binds the O2between a copper and an iron; the protein transfers 8 electrons to the O2 molecule to reduce it to two molecules of water.

Copper is also found in many superoxide dismutases, proteins that catalyze the decomposition of superoxides by converting it (by disproportionation) to oxygen and hydrogen peroxide:

The protein hemocyanin is the oxygen carrier in most mollusks and some arthropods such as the horseshoe crab (Limulus polyphemus).[127] Because hemocyanin is blue, these organisms have blue blood rather than the red blood of iron-based hemoglobin. Structurally related to hemocyanin are the laccases and tyrosinases. Instead of reversibly binding oxygen, these proteins hydroxylate substrates, illustrated by their role in the formation of lacquers.[125]

Several copper proteins, such as the "blue copper proteins", do not interact directly with substrates, hence they are not enzymes. These proteins relay electrons by the process called electron transfer.[125] 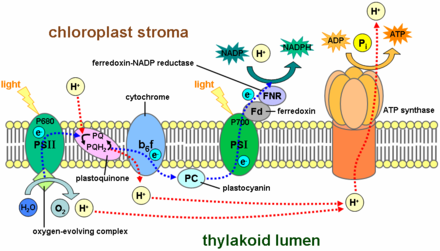 Photosynthesis functions by an elaborate electron transport chain within the thylakoid membrane. A central link in this chain is plastocyanin, a blue copper protein.

A unique tetranuclear copper center has been found in nitrous-oxide reductase.[128]

Copper is an essential trace element in plants and animals, but not all microorganisms. The human body contains copper at a level of about 1.4 to 2.1 mg per kg of body mass.[129] Copper is absorbed in the gut, then transported to the liver bound to albumin.[130] After processing in the liver, copper is distributed to other tissues in a second phase, which involves the protein ceruloplasmin, carrying the majority of copper in blood. Ceruloplasmin also carries the copper that is excreted in milk, and is particularly well-absorbed as a copper source.[131] Copper in the body normally undergoes enterohepatic circulation (about 5 mg a day, vs. about 1 mg per day absorbed in the diet and excreted from the body), and the body is able to excrete some excess copper, if needed, via bile, which carries some copper out of the liver that is not then reabsorbed by the intestine.[132][133]

The Food and Nutrition Board of the U.S. Institute of Medicine updated Estimated Average Requirements (EARs) and Recommended Dietary Allowances (RDAs) for copper in 2001. The current EAR for copper for people ages 14 and up is 0.7 mg/day. The RDA is 0.9 mg/day. RDAs are higher than EARs so as to identify amounts that will cover people with higher than average requirements. RDA for pregnancy equals 1.0 mg/day. RDA for lactation equals 1.3 mg/day. For infants up to 12 months the AI is 0.22 mg/day and for children ages 1–13 years the RDA increases with age from 0.34 to 0.7 mg/day. As for safety, the Food and Nutrition Board also sets Tolerable Upper Intake Levels (known as ULs) for vitamins and minerals when evidence is sufficient. In the case of copper the UL is set at 10 mg/day. Collectively the EARs, RDAs, AIs and ULs are referred to as Dietary Reference Intakes.[134] The European Food Safety Authority reviewed the same safety question and set its UL at 5 mg/day.[135]

For U.S. food and dietary supplement labeling purposes the amount in a serving is expressed as a percent of Daily Value (%DV). For copper labeling purposes 100% of the Daily Value was 2.0 mg, but as of May 2016 it has been revised to 0.9 mg. Food and supplement companies have until July 28, 2018 to comply with the change. A table of the pre-change adult Daily Values is provided at Reference Daily Intake.

Severe deficiency can be found by testing for low plasma or serum copper levels, low ceruloplasmin, and low red blood cell superoxide dismutase levels; these are not sensitive to marginal copper status. The "cytochrome c oxidase activity of leucocytes and platelets" has been stated as another factor in deficiency, but the results have not been confirmed by replication.[136]

Gram quantities of various copper salts have been taken in suicide attempts and produced acute copper toxicity in humans, possibly due to redox cycling and the generation of reactive oxygen species that damage DNA.[137][138] Corresponding amounts of copper salts (30 mg/kg) are toxic in animals.[139] A minimum dietary value for healthy growth in rabbits has been reported to be at least 3 ppm in the diet.[140] However, higher concentrations of copper (100 ppm, 200 ppm, or 500 ppm) in the diet of rabbits may favorably influence feed conversion efficiency, growth rates, and carcass dressing percentages.[141]

Chronic copper toxicity does not normally occur in humans because of transport systems that regulate absorption and excretion. Autosomal recessive mutations in copper transport proteins can disable these systems, leading to Wilson's disease with copper accumulation and cirrhosis of the liver in persons who have inherited two defective genes.[129]

Elevated copper levels have also been linked to worsening symptoms of Alzheimer's disease.[142][143]