Now that you are familiar with the different forms of nutrition research, the next step is understanding how to interpret and synthesize the information. To synthesize information on a certain topic, the two most popular methods are meta-analyses and systematic literature reviews. While there are differences between these two methods, they are similar overall in that they aim to draw a conclusion from the body of research evidence rather than from one study. We will focus on systematic literature reviews because of their rising popularity in biomedical literature.

A systematic literature review does what the name implies, it systematically reviews the literature related to a certain research question. For example, the research question might be, "Does chocolate decrease blood pressure?" There is a method for performing the review established ahead of time that details answers to questions such as:

The end product is a conclusion based on the evidence in the identified journal articles.

Because they synthesize the findings from multiple trials, systematic literature reviews are considered the highest level of nutrition research evidence and are therefore shown at the top of the strength of nutrition research pyramid below. In vitro studies are shown at the bottom of the triangle because they are the weakest form of evidence overall. It should be pointed out that most systematic literature reviews only consider epidemiological studies and clinical trials and do not include animal studies or in vitro evidence. While these studies are of less strength, they should still be considered. Figure 1.71 Strength of scientific research, a higher position on the pyramid mean greater strength of that form of evidence.

There are a couple of other factors to consider relating to the different forms of research. First, epidemiological studies cannot show causality (i.e. smoking causes lung cancer), but instead identify relationships or associations (i.e. smoking is associated with lung cancer occurrence). Clinical trials/human studies are the best form of primary research because their findings should be directly translatable to patients. So why use other forms of research? The description below should help explain why the other forms of research are also important.

In general, a certain sequence of studies in nutrition research is often followed as shown in the figure below. 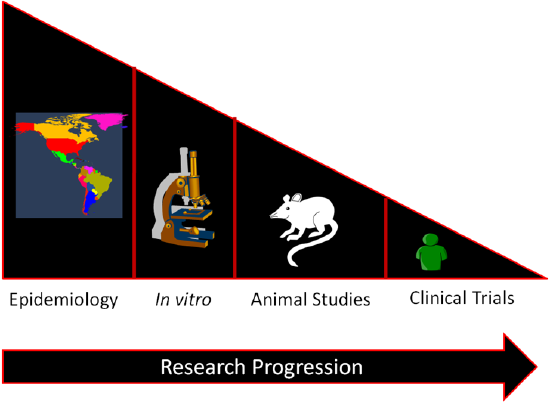 Figure 1.72 The progression of nutrition research. The shape indicates the selection of the most promising and safest hypotheses being moved to the next level. Thus, there is a decrease in the overall number of hypotheses represented by the height of the figure) being investigated by the next form of research.

In the early 1980s there was a lot of excitement among researchers over the epidemiological evidence showing that higher dietary consumption of the carotenoid, beta-carotene, decreased lung cancer risk. By the mid 1980’s, two large, randomized, placebo-controlled trials began to determine whether high-dose β-carotene supplementation (far higher than dietary intake) could decrease lung cancer incidence in high-risk populations before in vitro or animal studies had investigated this relationship. The research community was shocked when these two studies were terminated early in the mid 1990s because of significant increases in lung cancer incidence among smokers receiving β-carotene supplements. In vitro and animal studies completed after the clinical trial found that as β-carotene intake shifts from normal dietary levels to high, supplement-type levels, the effect on lung cancer development also shifts from beneficial to detrimental in combination with smoke or carcinogen exposure. Thus, if the normal research progression had been followed, it is likely that a lower dose of beta-carotene would have been used or trials wouldn't have been undertaken at all.

Another example of when the research progression was not followed was the relationship between selenium, vitamin E, and prostate cancer. Two clinical trials had found secondary results that suggested that selenium and vitamin E supplementation may decrease prostate cancer risk. A secondary result means it was not the primary outcome that the clinical trial was designed to find, thus they need to be interpreted with some caution. Rather than examining the relationship using in vitro and animal studies, a clinical trial was undertaken to determine if selenium and vitamin E supplementation alone, or in combination, could decrease the development of prostate cancer incidence. This clinical trial was also terminated early because of a nonsignificant increase in prostate cancer in those receiving vitamin E, and a nonsignificant increase in diabetes among those receiving selenium. In vitro studies and animal models performed since the clinical trial was undertaken and after its termination suggest that vitamin E is not effective and that another form of selenium could have possibly been more effective.

In addition to the lessons learned about the sequence of research in nutrition, these studies add to growing evidence that suggests that single-agent interventions, even in combination, may not be an effective strategy for improving health. The common nutrition research approach, after epidemiology finds an association or relationship, is to use in vitro and animal studies to identify the specific compound in a certain food that is responsible. This has been termed the reductionist approach because it takes something complex (food) and reduces it down to its simpler components. However, there is growing evidence that this may be a flawed approach. Some nutrition researchers feel that more focus should be on the food itself, rather than trying to discern exactly what is responsible for the beneficial health outcomes. Because it may not be one or 2 compounds alone that are responsible for the effect, it might be difficult to determine from the multitude of nutrients in foods which are responsible for the beneficial effect. This will mean changes in the overall research approach, especially at the human intervention studies/clinical trials level, because in most cases there is not a way to give a “placebo food”.