The lining of the stomach is made up of different layers of tissue. The mucosa is the outermost layer (closest to stomach cavity) as shown in the figure below. Figure 3.31 The anatomy of the stomach1

The mucosa is not a flat surface. Instead, its surface is lined by gastric pits, as shown in the figure below. Gastric pits are indentations in the stomach's surface that are lined by four different types of cells. Figure 3.33 Blowup of mucosa to show the structure of gastric pits1

The following video is a nice introduction to gastric pits and talks about chief and parietal cells that are covered in more detail below.

At the bottom of the gastric pit are the G cells that secrete the hormone gastrin. Gastrin stimulates the parietal and chief cells that are found above the G cells. The chief cells secrete the zymogen pepsinogen and the enzyme gastric lipase. A zymogen is an inactive precursor of an enzyme that must be cleaved or altered to form the active enzyme. The parietal cells secrete hydrochloric acid (HCl), which lowers the pH of the gastric juice (water + enzymes + acid). The HCl inactivates salivary amylase and catalyzes the conversion of pepsinogen to pepsin. Finally, the top of the pits are the neck cells that secrete mucus to prevent the gastric juice from digesting or damaging the stomach mucosa3. The table below summarizes the actions of the different cells in the gastric pits.

Table 3.41 Cells involved in the digestive processes in the stomach

The figure below shows the action of all these different secretions in the stomach. Figure 3.34 The action of gastric secretions in the stomach

To reiterate, the figure above illustrates that the neck cells of the gastric pits secrete mucus to protect the mucosa of the stomach from essentially digesting itself. Gastrin from the G cells stimulates the parietal and chief cells to secrete HCl and enzymes, respectively.

The HCl in the stomach denatures salivary amylase and other proteins by breaking down the structure and, thus, the function of it. HCl also converts pepsinogen to the active enzyme pepsin. Pepsin is a protease, meaning that it cleaves bonds in proteins. It breaks down the proteins in food into individual peptides (shorter segments of amino acids). The other enzyme that is active in the stomach is gastric lipase. This enzyme preferentially cleaves the sn-3 position of triglycerides to produce 1,2-diglyceride and a free fatty acid, as shown below4. It is responsible for up to 20% of triglyceride digestion3. 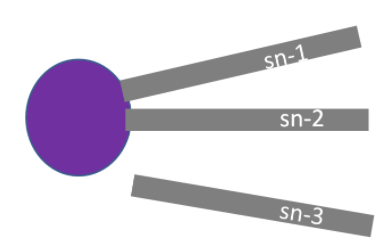 The chyme will then leave the stomach and enter the small intestine via the pyloric sphincter (shown below).

Figure 3.36 Cross section of the stomach showing the pyloric sphincter5

Table 3.32 Summary of chemical digestion in the stomach