A student once asked this question:

"I started taking the Mega Man Sport Multi-vitamin from GNC and about an hour or two after consumption, with a meal, my pee is bright, practically neon yellow. What does that mean?"

Since this question is leading off the riboflavin section, you have probably surmised that riboflavin is somehow involved. Indeed, flavin means yellow in Latin, and riboflavin is bright yellow as shown below. Riboflavin is also a water-soluble B vitamin, so the student was excreting large amounts of riboflavin in his urine, leading it to become "bright, practically neon yellow." The structure of riboflavin is shown below. FAD has been introduced before, but structurally you can see where riboflavin is within the compound below. The 2 circled nitrogens are the sites that accept hydrogen to become FADH2 as illustrated below.

Figure 10.44 Addition of two hydrogens to the rings of FAD to form FADH24

The structure of FMN as shown below, is similar to FAD, except that it only contains one phosphate group (versus 2) and doesn't have the ring structures from the phosphate groups that are found in FAD. 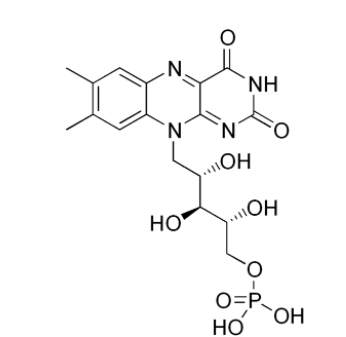 Riboflavin is photosensitive, meaning that it can be destroyed by light. This was a problem in the old days when the milkman delivered milk in clear glass bottles. These have now been replaced by cartons or opaque plastic containers to help protect the riboflavin content of the milk. Figure 10.46 Milk is no longer packaged in clear glass bottles to help protect its riboflavin from light destruction

Riboflavin in foods is free, protein-bound, or in FAD or FMN. Only free riboflavin is absorbed so it must be cleaved, or converted before absorption6. Riboflavin is highly absorbed through an unresolved process, though it is believed a carrier is involved7. As you would guess from the description above, riboflavin is primarily excreted in the urine.