Rickets is a vitamin D deficiency in infants and children. A lack of vitamin D leads to decreased bone mineralization, causing the bones to become weak. The bones then bow under pressure, leading to the characteristic bowed legs, as seen below. 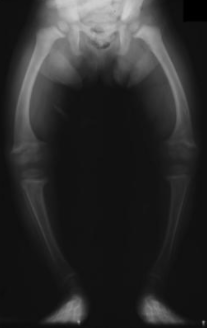 Another characteristic symptom of rickets is rachitic rosary, or beaded ribs. The beading occurs at the areas where cartilage meets bone on the rib cage, as shown in the link below3.

Osteomalacia is a vitamin D deficiency in adults and results in poor bone mineralization. The bone becomes soft, resulting in bone pain and an increased risk of fractures3.

While rickets and osteomalacia are fairly rare in the United States, it is believed that vitamin D insufficiency might be much more widespread. Insufficiency means that the level of intake, or body status, is suboptimal (neither deficient nor optimal). The figure below illustrates this concept. 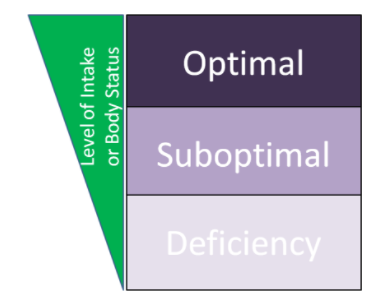 Suboptimal/insufficient means intake, or status, is higher than deficient, but lower than optimal. Thus, higher intake levels will provide additional benefits. The functions of vitamin D are growing by the day due to increased research discoveries. These functions now include benefits beyond bone health, further supporting the importance of vitamin D. In late 2010, an RDA for vitamin D was established (was an Adequate Intake before). This made it, along with calcium, the first micronutrients to have their DRIs revised4. The RDA for vitamin D is 3 times higher than the previous AI. Many believe these are more reasonable levels, while others think that the new RDA is still not high enough. This belief, that many people’s vitamin D intake/status is suboptimal, is challenged by a recent review described in the link below that found that vitamin D did not reduce osteoporosis risk. In addition, a recent meta-analysis (second link) concluded that “there is probably no benefit to expect from vitamin D supplementation in normally healthy people.”

Vitamin D from supplements can become toxic. You cannot develop vitamin D toxicity from sun exposure, because the sunlight degrades a precursor of vitamin D3 in the skin5. Vitamin D toxicity results in hypercalcemia or high blood calcium levels. These become problematic because it can lead to the calcification of soft tissues.