Sentinel lymph node biopsy (SLNB) is a minimally invasive procedure used to localize and sample the first echelon individual draining nodes of a malignant tumor and to identify occult (micro-metastatic) disease. In doing so, the technique provides accurate regional staging and identifies patients who may benefit from additional surgery and/or adjuvant therapy. Even though sentinel nodes are by definition, confined to the first echelon draining nodes, technological advances now permit multiple echelons to be detected.

All patients presenting with clinically and radiographically localized Stage I and II disease and a tumor depth of invasion >1 mm should be offered SLNB. In addition, select patients with thinner melanomas measuring a depth of 0.75 - 1.0mm in the setting of poor prognostic features to include young age, tumor regression, ulceration, mitotic rate >1 feature/mm2, angiolympathic invasion, and a positive deep margin can also be offered the procedure.

It is also recognized that a subset of aggressive, recalcitrant cSCCs such as those seen in the immunosuppressed patient population, may benefit from regional restaging with SLNB.

Oral cavity SLNB studies demonstrate a 90-100% detection rate for occult nodal metastasis when conducted in the setting of experienced institutions5. SLNB has been adopted for early stage mucosal SCC of the oral cavity. Patients with early stage T1 and T2 tumors can be considered for this staging modality if they are clinically and radiographically node negative. Other mucosal subsites within the head and neck region have not been included due to the challenge of anatomic access for preoperative injections described below.

Regardless of cancer type, all patients require a punch biopsy or narrow margin (1-3 mm) excisional biopsy of the primary tumor for diagnosis (Figure 1). Wide local excision (WLE) with larger 0.5-2 cm margins is discouraged because the surrounding tissue which contains the true draining lymphatics of the cancer is removed in the process and thereby can compromise sentinel lymph node (SLN) mapping and SLNB accuracy. 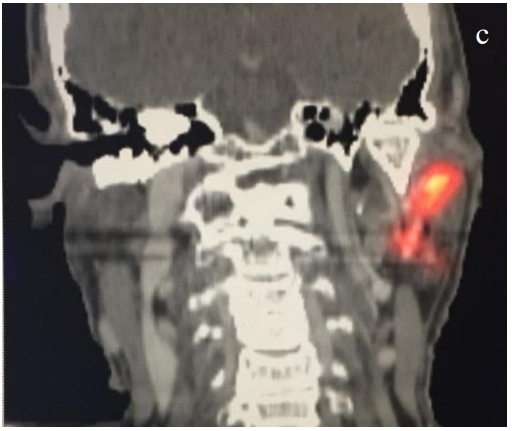 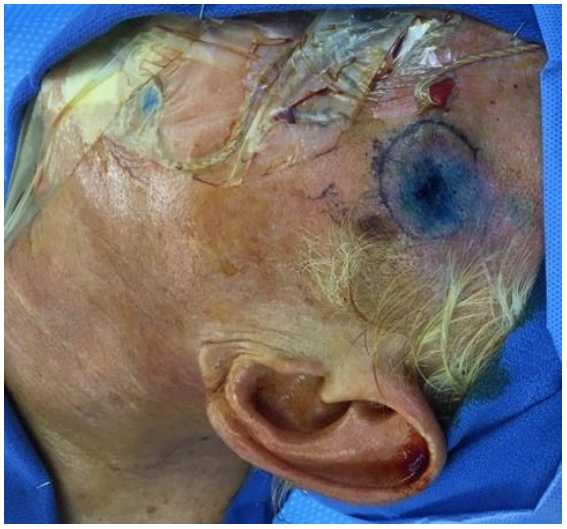 Figure 7: A 1-2 cm incision is made over the area of increased radioactivity. The incision should be large enough to introduce the entire head of the gamma probe Patients with a negative SLNB are traditionally followed closely with routine examinations of the primary tumor site and draining lymph nodes.

The role of SLNB in cutaneous melanoma has recently shifted from a staging and diagnostic modality to a potentially therapeutic intervention7. Results of the long-awaited MSLT-II have now been published8. This international, multi-institutional prospective trial randomized patients with a positive SLNB to CLND (n=824) versus observation with ultrasound (n=931); 14% of enrolled patients had primary head & neck melanoma. At 3-years’ follow-up the primary outcome measure of melanoma specific survival was identical between the immediate CLND and observation arms (86 +/- 1.3% versus 86 +/- 1.2%; p=0.42). For this reason, melanoma patients with a positive SLN are now being offered observation with serial ultrasound instead of CLND at some institutions. It should be noted that immediate CLND did demonstrate an improved overall disease-free survival (68 +/- 1.7% vs. 63 +/- 1.7%; p=0.05). Specifically, the disease control rate in the regional nodes was 92 +/- 1.0% for the CLND arm versus 77 +/1 1.5% in the observation arm (p<0.001). Ultimately, a candid conversation is required to allow patients to understand the risks and benefits associated with CLND versus observation so that they can make an informed decision.