However, problems do arise from time-to-time with the TOF and tracheoesophageal voice prosthesis1,2

When the fistula enlarges with leakage of saliva and food around the prosthesis, or a decision is made to discontinue fistula speech and the TOF is no required, the TOF needs to be allowed to close or be closed.

Risk factors for an enlarging TOF include3 Figure 4: Very large TOF with the nasogastric feeding tube visible in the esophagus

If above conservative treatments fail, or there is a very large TOF as in Figure 4, surgical closure of a TOF becomes necessary. Repuncture with placement of a new tracheoesophageal prosthesis is possible sometime after closure of the problematic fistula. Candidates for surgical closure should also be counseled about alternative methods of voice rehabilitation e.g. esophageal speech and electrolarynx.

When planning closure of a TOF, assess the size of the stoma for the presence of stomal stenosis so that stomaplasty can be performed at the time of closure of the TOF.

TOFs are notoriously difficult to close, and the success rate is highly variable7 due to the poor blood supply of the irradiated and fibrotic tissue. Various methods of TOF closure have been reported:

However, use of flaps is limited by the bulkiness of the flaps

The method described below is simple and does not require any flaps, unless closure of the esophageal defect will result in esophageal stenosis and requires reconstruction with a flap for that reason. 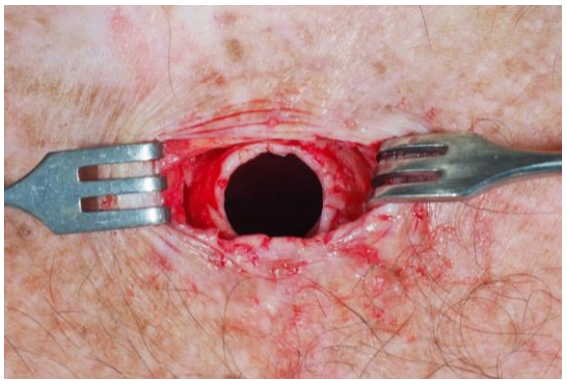 Figure 5: Tracheostoma incised circumferentially and for a few centimeters along the wall of the trachea Figure 6: TOF identified and divided. The esophageal defect is being closed with 3-0 Vicryl sutures Figure 7: Trachea is mobilized and proximal tracheal rings are resected inferior to the level of the TOF This case illustrates the proximity of the common carotid artery to the trachea, and the need to maintain a dissection plane on the tracheal wall. The patient had a very large tracheoesophageal fistula that had developed spontaneously some years after surgery and radiation therapy (Figures 4, 6). During the dissection the common carotid artery was noted to be covered by only a thin layer of scar tissue in the left lateral wall of the tracheostoma with the tracheal rings having resorbed (Figure 7). The trachea was stuck down and fibrotic, and mobilizing the trachea was not possible. The carotid artery was carefully exposed over a length of 3 cm (Figure 7). The esophageal fistula was repaired with 3-0 Vicryl. Figure 7: After dissecting the trachea around the stoma, we noted a medialized left common carotid artery (CCA) situated in the lateral wall of the tracheostoma

A supraclavicular flap was designed (Figures 8-10) and tunneled into the stoma to cover and isolate the carotid from the tracheostoma to avoid carotid artery blowout in the future.