Selenium salts are toxic in large amounts, but trace amounts are necessary for cellular function in many organisms, including all animals. Selenium is an ingredient in many multivitamins and other dietary supplements, including infant formula. It is a component of the antioxidant enzymes glutathione peroxidase and thioredoxin reductase (which indirectly reduce certain oxidized molecules in animals and some plants). It is also found in three deiodinase enzymes, which convert one thyroid hormone to another. Selenium requirements in plants differ by species, with some plants requiring relatively large amounts and others apparently requiring none.[5]

Although it is toxic in large doses, selenium is an essential micronutrient for animals. In plants, it occurs as a bystander mineral, sometimes in toxic proportions in forage (some plants may accumulate selenium as a defense against being eaten by animals, but other plants, such as locoweed, require selenium, and their growth indicates the presence of selenium in soil).[5] See more on plant nutrition below.[clarification needed]

Selenium is a component of the unusual amino acids selenocysteine and selenomethionine. In humans, selenium is a trace element nutrient that functions as cofactor for reduction of antioxidant enzymes, such as glutathione peroxidases[70]and certain forms of thioredoxin reductase found in animals and some plants (this enzyme occurs in all living organisms, but not all forms of it in plants require selenium).

Selenium may inhibit Hashimoto's disease, in which the body's own thyroid cells are attacked as alien. A reduction of 21% on TPO antibodies is reported with the dietary intake of 0.2 mg of selenium.[72]

Increased dietary selenium reduces the effects of mercury toxicity,[73][74][75] although it is effective only at low to modest doses of mercury.[76] Evidence suggests that the molecular mechanisms of mercury toxicity includes the irreversible inhibition of selenoenzymes that are required to prevent and reverse oxidative damage in brain and endocrine tissues.[77][78]

From about three billion years ago, prokaryotic selenoprotein families drive the evolution of selenocysteine, an amino acid. Selenium is incorporated into several prokaryotic selenoprotein families in bacteria, archaea, and eukaryotes as selenocysteine,[79] where selenoprotein peroxiredoxins protect bacterial and eukaryotic cells against oxidative damage. Selenoprotein families of GSH-Px and the deiodinases of eukaryotic cells seem to have a bacterial phylogenetic origin. The selenocysteine-containing form occurs in species as diverse as green algae, diatoms, sea urchin, fish, and chicken. Selenium enzymes are involved in the small reducing molecules glutathione and thioredoxin. One family of selenium-bearing molecules (the glutathione peroxidases) destroys peroxide and repairs damaged peroxidized cell membranes, using glutathione. Another selenium-bearing enzyme in some plants and in animals (thioredoxin reductase) generates reduced thioredoxin, a dithiol that serves as an electron source for peroxidases and also the important reducing enzyme ribonucleotide reductase that makes DNA precursors from RNA precursors.[80]

Trace elements involved in GSH-Px and superoxide dismutase enzymes activities, i.e. selenium, vanadium, magnesium, copper, and zinc, may have been lacking in some terrestrial mineral-deficient areas.[79] Marine organisms retained and sometimes expanded their selenoproteomes, whereas the selenoproteomes of some terrestrial organisms were reduced or completely lost. These findings suggest that, with the exception of vertebrates, aquatic life supports selenium use, whereas terrestrial habitats lead to reduced use of this trace element.[81] Marine fishes and vertebrate thyroid glands have the highest concentration of selenium and iodine. From about 500 million years ago, freshwater and terrestrial plants slowly optimized the production of "new" endogenous antioxidants such as ascorbic acid (vitamin C), polyphenols (including flavonoids), tocopherols, etc. A few of these appeared more recently, in the last 50–200 million years, in fruits and flowers of angiosperm plants. In fact, the angiosperms (the dominant type of plant today) and most of their antioxidant pigments evolved during the late Jurassic period.[citation needed]

The deiodinase isoenzymes constitute another family of eukaryotic selenoproteins with identified enzyme function. Deiodinases are able to extract electrons from iodides, and iodides from iodothyronines. They are, thus, involved in thyroid-hormone regulation, participating in the protection of thyrocytes from damage by H2O2 produced for thyroid-hormone biosynthesis.[82] About 200 million years ago, new selenoproteins were developed as mammalian GSH-Px enzymes.[83][84][85][86]

Dietary selenium comes from nuts, cereals and mushrooms. Brazil nuts are the richest dietary source (though this is soil-dependent, since the Brazil nut does not require high levels of the element for its own needs).[87][88]

In June 2015 the U.S. Food and Drug Administration (FDA) published its final rule establishing the requirement of minimum and maximum levels of selenium in infant formula.[89]

The selenium content in the human body is believed to be in the 13–20 milligram range.[90]

Selenium may be measured in blood, plasma, serum, or urine to monitor excessive environmental or occupational exposure, to confirm a diagnosis of poisoning in hospitalized victims, or investigate a suspected case of fatal overdose. Some analytical techniques are capable of distinguishing organic from inorganic forms of the element. Both organic and inorganic forms of selenium are largely converted to monosaccharide conjugates (selenosugars) in the body prior elimination in the urine. Cancer patients receiving daily oral doses of selenothionine may achieve very high plasma and urine selenium concentrations.[92]

Although selenium is an essential trace element, it is toxic if taken in excess. Exceeding the Tolerable Upper Intake Level of 400 micrograms per day can lead to selenosis.[93] This 400 µg Tolerable Upper Intake Level is based primarily on a 1986 study of five Chinese patients who exhibited overt signs of selenosis and a follow up study on the same five people in 1992.[94] The 1992 study actually found the maximum safe dietary Se intake to be approximately 800 micrograms per day (15 micrograms per kilogram body weight), but suggested 400 micrograms per day to avoid creating an imbalance of nutrients in the diet and to accord with data from other countries.[95] In China, people who ingested corn grown in extremely selenium-rich stony coal (carbonaceous shale) have suffered from selenium toxicity. This coal was shown to have selenium content as high as 9.1%, the highest concentration in coal ever recorded.[96]

Signs and symptoms of selenosis include a garlic odor on the breath, gastrointestinal disorders, hair loss, sloughing of nails, fatigue, irritability, and neurological damage. Extreme cases of selenosis can exhibit cirrhosis of the liver, pulmonary edema, or death.[97]Elemental selenium and most metallic selenides have relatively low toxicities because of low bioavailability. By contrast, selenates and selenites have an oxidant mode of action similar to that of arsenic trioxide and are very toxic. The chronic toxic dose of selenite for humans is about 2400 to 3000 micrograms of selenium per day.[98] Hydrogen selenide is an extremely toxic, corrosive gas.[99] Selenium also occurs in organic compounds, such as dimethyl selenide, selenomethionine, selenocysteine and methylselenocysteine, all of which have high bioavailability and are toxic in large doses.

On 19 April 2009, 21 polo ponies died shortly before a match in the United States Polo Open. Three days later, a pharmacy released a statement explaining that the horses had received an incorrect dose of one of the ingredients used in a vitamin/mineral supplement compound that had been incorrectly compounded by a compounding pharmacy. Analysis of blood levels of inorganic compounds in the supplement indicated the selenium concentrations were ten to fifteen times higher than normal in the blood samples, and 15 to 20 times higher than normal in the liver samples. Selenium was later confirmed to be the toxic factor.[100]

Selenium poisoning of water systems may result whenever new agricultural runoff courses through normally dry, undeveloped lands. This process leaches natural soluble selenium compounds (such as selenates) into the water, which may then be concentrated in new "wetlands" as the water evaporates. Selenium pollution of waterways also occurs when selenium is leached from coal flue ash, mining and metal smelting, crude oil processing, and landfill.[101] The resultant high selenium levels in waterways were found to cause congenital disorders in oviparous species, including wetland birds[102] and fish.[103] Elevated dietary methylmercury levels can amplify the harm of selenium toxicity in oviparous species.[104][105] 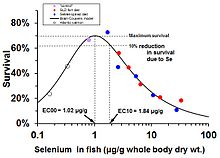 Relationship between survival of juvenile salmon and concentration of selenium in their tissues after 90 days (Chinook salmon[106]) or 45 days (Atlantic salmon[107]) exposure to dietary selenium. The 10% lethality level (LC10=1.84 µg/g) was derived by applying the biphasic model of Brain and Cousens[108] to only the Chinook salmon data. The Chinook salmon data comprise two series of dietary treatments, combined here because the effects on survival are indistinguishable.

In fish and other wildlife, selenium is necessary for life, but toxic in high doses. For salmon, the optimal concentration of selenium is about 1 microgram selenium per gram of whole body weight. Much below that level, young salmon die from deficiency;[107] much above, they die from toxic excess.[106]

The Occupational Safety and Health Administration (OSHA) has set the legal limit (Permissible exposure limit) for selenium in the workplace at 0.2 mg/m3 over an 8-hour workday. The National Institute for Occupational Safety and Health (NIOSH) has set a Recommended exposure limit (REL) of 0.2 mg/m3 over an 8-hour workday. At levels of 1 mg/m3, selenium is immediately dangerous to life and health.[109]

Selenium deficiency is rare in otherwise healthy, well-nourished individuals. It can occur in patients with severely compromised intestinal function, those undergoing total parenteral nutrition, and[110] in those of advanced age (over 90). Also, people dependent on food grown from selenium-deficient soil are at risk. Although New Zealand soil has low levels of selenium, adverse health effects have not been detected in the residents.[111]

Selenium deficiency, defined by low (<60% of normal) selenoenzyme activity levels in brain and endocrine tissues, occurs only when a low selenium level is linked with an additional stress, such as high exposures to mercury[112]or increased oxidant stress from vitamin E deficiency.[113]

Selenium interacts with other nutrients, such as iodine and vitamin E. The effect of selenium deficiency on health remains uncertain, particularly in relation to Kashin-Beck disease.[114] Also, selenium interacts with other minerals, such as zinc and copper. High doses of Se supplements in pregnant animals might disturb the Zn:Cu ratio and lead to Zn reduction; in such treatment cases, Zn levels should be monitored. Further studies are needed to conﬁrm these interactions.[115]

In the regions (e.g. various regions within North America) where low selenium soil levels lead to low concentrations in the plants, some animal species may be deficient unless selenium is supplemented with diet or injection.[116]Ruminants are particularly susceptible. In general, absorption of dietary selenium is lower in ruminants than other animals, and is lower from forages than from grain.[117] Ruminants grazing certain forages, e.g., some white clover varieties containing cyanogenic glycosides, may have higher selenium requirements,[117] presumably because cyanide is released from the aglycone by glucosidase activity in the rumen[118] and glutathione peroxidases is deactivated by the cyanide acting on the glutathione moiety.[119] Neonate ruminants at risk of white muscle disease may be administered both selenium and vitamin E by injection; some of the WMD myopathies respond only to selenium, some only to vitamin E, and some to either.[120]